What are your best crazy adventure starts?

Wasn’t Dark Sun, but the time the PCs woke up and realized a mad wizard had switched their brains. A lot of expected shenanigans ensued. Until the wizard decided he didn’t want his old body back. It was the fighter’s body and ripped and badass, plus his knowledge of wizardry. He bragged to the fighter trapped in his body that he wasn’t going to switch. He had everything the fighter had once possessed. The fighter said “Did you forget about the villain who has a 1 million gold coin contract on my head and the woman pursuing me for alimony payments?”

With the limited intel of the fighter body, even if the wizard had knowledge, he would have felt quite locked inside his new body!

I know it depends on DMs and edition rules, but usually when you swap bodies, take a new body etc, you retain your own knowledge, spellcasting, INT, WIS and CHA scores, and use the STR, CON and DEX scores of the host body.

Which has given NPCs since 1E the chance to take younger, healthier bodies to keep themselves alive (Fistandantilus and Daskinor, I’m looking at you!)

Reminds me of that episode of the Tick when that evil genius got to take over the Tick’s body, and was loving his athleticism.

Had my Silt Pirate/Balican Freebooters and Balican legonare pcs fight in ship to ship combat only to be attacked by giants. Be forced to team up, then get stranded on a island that will soon be covered by the silt when the wind changes.

Time loop in the sacrificial pit. The small caravan was captured by a group of ex-slaves who were cultists of bloody mother-earth. Players had 2 goals on start - escape and breaking time loop.

This team hadn’t experiences in RPG’s so time loop was (IMO in this old times) good option to introduction and rationalization of their activities. After years… maybe not too god. But also this wasn’t normal start so…

Similar to @neujack one, PCs just woke up at their home, with blurred memories about who they are themselves, just when they are being attacked by an hostile group of strange looking individuals.

They fight them out and finally have time to check their surroundings and see that they woke from several ceremonial tombs. They were buried 5.000 years ago as protectors of their king body, and the hostile group were modern grave robbers.

Worst of all, the body of their king is not in his tomb…

The players were summoned from their respective worlds via a classic hero summoning trope, only something went wrong just as they were about to arrive, and they were randomly scattered around the world using the thrown splash weapon miss table multiplied by hundreds of miles.

They all have a directional sense of where they need to go, but nothing else! Each of them landed in different sorts of trouble where they crashed.

The players were summoned from their respective worlds via a classic hero summoning trope, only something went wrong just as they were about to arrive, and they were randomly scattered around the world using the thrown splash weapon miss table multiplied by hundreds of miles.

They all have a directional sense of where they need to go, but nothing else! Each of them landed in different sorts of trouble where they crashed.

I used this opener for a TORG The Possibility Wars campaign I once ran!

It’s a fun concept! I enjoyed the campaign as long as it lasted.

My current Dark Sun, used this as a Campaign Start. Although, it is more than just the start. I wanted to share it anyway.

All of the characters began in the City-State of Raam as minions to a Merchant before the death of the Sorcerer Queen, Abalach-Re. Their first adventure started in the middle of a chaotic street fight against minions of another Merchant House being interrupted by Templars. The PCs to fight and then run, with several of them being captured by Templars and others having to lay low till they could make their way back to their merchant master. The Merchant who employed them managed to bribe the release of his minions captured by the Templars. At this point, the party organically has truly become close and admire their Merchant Boss. So they begin working in earnest for him doing special missions against other merchant houses becoming more loyal to him as they go.

The missions are mostly espionage, extractions, and saboteur missions. This allowed me to build up couple of recurring villains including a Templar who was attempting to bring them to the Queen’s Justice and discover their Merchant Boss over several encounters. Eventually, they are discovered by him and he plans a two-prong raid to launch against the Party’s Merchant Boss’ hideout by a rival merchant house paid to assist Templars in the raid. The party manages to escape along while protecting their Merchant Boss.

Their Merchant Boss then reveals to them he is actually a former Templar of Tyr’s Sorcerer King Kalak who turned his cloak after meeting with the nobleman Agis and convinced him of Kalak’s evil. Agis then sent him to work on building a resistance and to spy in preparation for the coming of Rikus’ and Tyr’s gladiator army to the gates of Raam. After revealing his true allegiance, he then reveals the location of a Moon Gate used in Athas’s ancient past to travel long distances via magic. He further reveals a map (stolen by the PCs in an earlier adventure) of an enclave said to be a paradise of water, freedom, and plenty somewhere far to the east beyond the Tablelands. After they make their escape, he invites them to travel with him, beginning finding an intact Moon Gate, and then using the coordinates on the map to travel via the Moon Gate to the far east in search of the fabled paradise.

Fortunately, the paradise turns out to be somewhat real. Unfortunately, their Merchant Boss/Former Templar dies during the trip to locate the fabled paradise. The actual City-State outside the Tablelands is ruled by an Elemental being of great power calling itself Lord of the City. Despite it having nearly unlimited access to water and plant life, the Elemental Lord is indifferent to non-animals, non-plants, and non-elemental beings, as it uses them as slaves and fuel to keep the ancient techno-magic running the city. Instead of freedom only more slavery and toil can be found at the rule of this Elemental Lord.
At this point, my PCs decided they will escape the Elemental’s tyranny and overthrow his rule. After a few short resistance-fighter type adventures, they have discovered the Kreen Empire beyond the City-State’s borders and plan to seek them out as possible allies to destroying the Elemental Lord’s power. However, they do not know the intentions of the alien Kreen, who may have other plans… This is where we are at now so it can go anywhere, but I don’t want to divulge more information as we are still playing through the campaign and my players may be lurking on Arena…

The adventure we were currently playing in for Dark Sun began with a grim beginning. We were in a caravan that was stuck in a sandstorm. It completely overwhelmed us. Seeking shelter in old ruins, the DM revealed this was an ancient temple built for the element of Air. We surmised it had been covered in sand for some reason, as no one really knew it existed. That, or we just got so completely lost.

Even after our brief exploration and the sand died down, we were days away from Tyr. Most of our supplies were ruined, and things were incredibly ill-fated. The DM wanted it to be a survival campaign at least in the beginning, to prove how difficult the world of Athas was. He really drove that point home, as we quickly figured out that none of us had points in survival. Only my character, who was Draji, had a chance at finding a way to Tyr, relying on the character’s knowledge of the stars for geography.

It was a very fun setting for the characters to get involved in, as well as a great explanation of the world of Athas. Accepting the tyranny of the Sorcerer Kings was one thing. Surviving out in the wastes? That was something that was not feasible by our characters. So as terrible as the templar were, because Kalak was still alive in this campaign, it meant shelter and water.

It was a very fun setting for the characters to get involved in, as well as a great explanation of the world of Athas. Accepting the tyranny of the Sorcerer Kings was one thing. Surviving out in the wastes? That was something that was not feasible by our characters. So as terrible as the templar were, because Kalak was still alive in this campaign, it meant shelter and water.

This comment is spot on. In the city-states you must cope with corrupt templars, but they are a lot less arbitrary than an elven tribe in the desert, or a group of escaped slaves, and whatnot. Food, water and (relative) safety is to be found within the walls of the city-states. It’s dog eat dog out in the wastes. 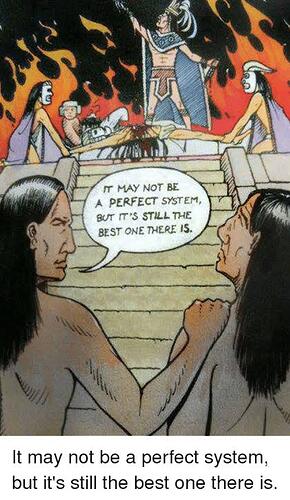 Yep! It made for a grizzly introduction to Dark Sun!
The DM also made it a point of not allowing items or powers such as sustenance or Create Food and Water. It wasn’t better in Tyr, as the DM decided to give us the whole treatment, and had our characters arrested and made to fight in the Arena (as one of the NPCs we were travelling with was a mage, so for harboring a fugitive we were convicted to fight for Kalak’s arena). It certainly put strong impressions of the Templar in our minds to be sure!

My players were freemen, from Tyr, that explored the Ringing Mountains, found the Forest Ridge and were eaten by Halflings.

And slavery seems to happen a lot in Dark Sun; especially for players of Templars or Dune-Traders; slavery, in my world only happens in three-ways, 1. players are born into it, i.e. Gladiators, 2. They make poor ethical or logical-choices, even with me hinting and letting them make INT-rolls; 3. Bad luck via dice-rolls.