Another attempt at an Athasian Cerebremancer

After a few years of crafting 3.5e classes, I am starting to feel like my material is becoming more refined. Ultimate Magus chassis here, with a couple of class features replacing the stuff that doesn’t make sense. Something like this should be fun PC to play, or make for interesting NPCs.

To qualify to become an Athasian Cerebremancer, a character must fulfill all the following criteria.

The cerebremancer requires little adaptation, since the prestige class fits into any setting with both spellcasters and psions, or any similar classes. To make the cerebremancer into prestige class that advances divine spellcasting and psionics, simply change “arcane” to “divine”, and “Knowledge (arcana)” to “Knowledge (religion)” and call the class psychic theurge. If a character is somehow both a cerebremancer and psychic theurge, they get no additional benefits from the various class features except the two bonus feats. Twin Wells always has a maximum of +4 for psionic manifesting or arcane or divine spellcasting.

Skill Points at Each Level

At each level except 1st, 4th, and 7th, you gain new spells per day as if you had also attained a level in any one arcane spellcasting class he belonged to before you added the prestige class. You gain additional power points per day and access to new powers as if you had also gained a level in any one manifesting class you belonged to previously. You do not, however, gain any other benefit a character of either class would have gained (bonus metamagic, metapsionic, or item creation feats, psicrystal special abilities, and so on).

Twin Wells (Ex): At 1st level, your caster level or manifester for all arcane spells or psionic powers increases by 1. It increases again at 4th level, 7th level, and 10th level (to a maximum of +4).

Meta-UMD (Ex): At 2nd level, you receive a competence bonus to Use Magic Device of 1/4th your ranks (round down) in Use Psionic Device, and vice versa. 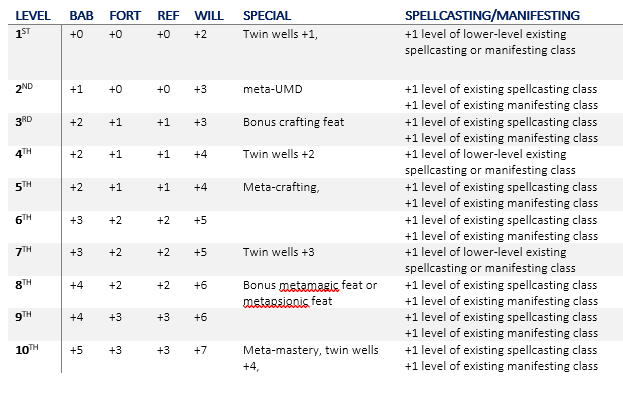 The Mystic Invocator, a dual progression templar warlock. I tried this before and wasn’t happy with the results. The previous version was too eldritch, while Athasian warlocks connected to a sorcerer king shouldn’t be like that.

Why follow the path of the Mystic Invocator, you ask? Power. Limitless, unbounded power.

Mystic Invocators seek the quick acquisition of mystical power from their connection with their sorcerer monarch. This power grab comes at a cost. Mystic Invocators are less politically astute than their single classed templarate counterparts, and they lack the training their more focused fellows receive. Despite the breadth of their powers, Mystic Invocators rarely reach the highest ranks of the templarate.

To qualify to become a Mystic Invocator, a character must fulfill all the following criteria.

Invocations: Ability to use least invocations.

At each level except 1st, 4th, and 7th, you gain new spells per day as if you had also attained a level in any one divine spellcasting class he belonged to before you added the prestige class. You gain additional invocations and access to new invocations as if you had also gained a level in any one invoking class you belonged to previously (including eldritch blast). You do not, however, gain any other benefit a character of either class would have gained (templarate training, advanced learning, and so on).

Turn/Rebuke Undead : Your levels in this class stack with your other class levels for the purpose of determining your ability to turn or rebuke undead.

Secular Aptitude (Ex): Your levels in this class stack for purposes of calculating the competence bonus to secular authority checks.

Mitigate Corruption (Ex): Your levels in this class stack for this class feature. 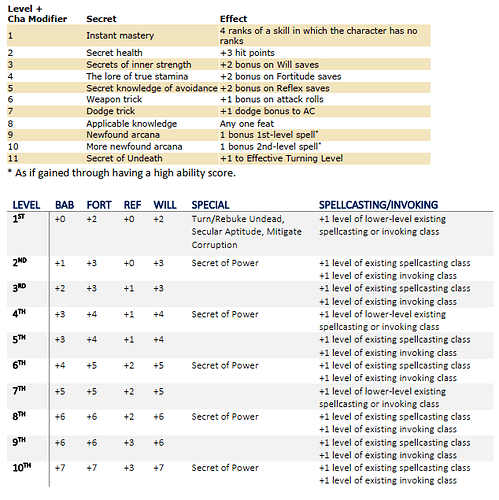