For a while now, I have been interested in faraway locations based on the well known fan map depicting the planet as a whole. Particularly the lands North West and on the desolated continent with volcano eruptions.
In time I have created some very loose ideas in line with atmosphere of Athas setting which I believe would fit the world and enrich it. In this thread I will present them one after another. Please keep in mind that this is just fluff I have been writing down based on my fascination with the world of Dark Sun that started in 90s. Some of these ideas are very brief and need further refinement and expansion.

For the Constant Garden a lot of inspiration is from Hothouse by Brian Aldiss, but also some ideas from Dark Sun novels and computer games as well.

I will start with my most intriguing concept which I have worked on for a while now. Some of it is written down in acceptable format to publish, other ideas still need to be phrased in eloquent way.

" The Highmoor Forest, also known as Constant Garden is a place few know about in Athas, and even fewer have returned from. The dense, humid forest vibrates with its own sounds and pulsating green life. The air feel thick and smells musky, with visible pollen and spores floating on warm currents of air. Here strange dreams and visions enter travellers minds, of greenery and join in union. The plants and animals seem odd, unlike anywhere else, flowers and trees connected by fungus covered vines sometimes patterned in geometric figures as if by design. Some madmen claim to have seen gardens the size of cities and shaped like ones, while others feel the eyes of each animal studying them with interest in unison. The few local human tribes are eerily silent and primitive, while tending to the rocky windswept shores, moving and collecting sand, salt, seagrass and sometimes driftwood and collecting it in places for unknown cause driven by strange drive just as they are seen digging away from villages for purposes unknown. But few know these stories, in history almost no adventurer returned from these lands, and those that had spoke stories so far fetched and often making little sense, they were considered lunatics themselves, of their companions suddenly going silent, of some refusing to speak one morning, and others of seeing visions of Athas being green. And everywhere…the mould, the fungus…with every breath and step feeling your lungs and covering your mouth, ears and hands, until you feel its stench no more…" 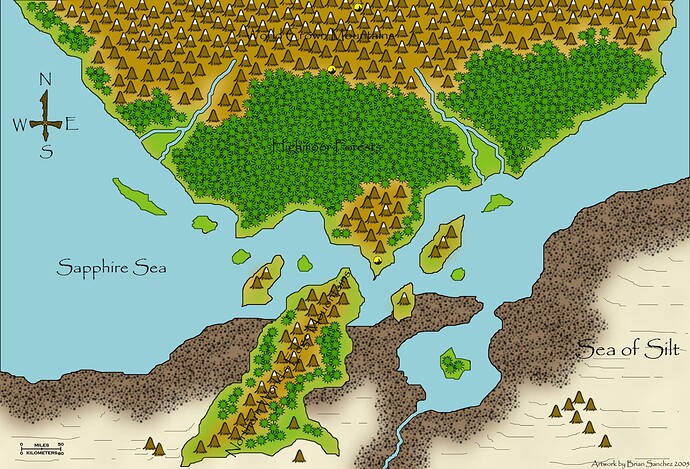 Far beyond the furthest frontier and across a Silt Ocean dwarfing the dried seas of the Tablelands lies the teeming, pulsating realm of vibrant green, tended by the Gardener.

Eons ago when Rhuilsti ruled this planet the North Planet became their experimental hothouse, a field and place of research and artistic where every imaginable flora and creation of their minds, was presented to the delight of the curators and common folk alike, the isolation of the place served both as means of contemplation and precaution lest failures of artistic heights got loose on the planet. Both the life benders and life shapers in more civilized times used the setting as a means of competition and rivalry.

All this came crushing down with the Brown Tide and the new Green Age.
Pressed by other matters requiring their attention the Rhuilsti left their half ruined ruins to their fate as the whole landscape became a barren wastelands under the colossal tides of death.
All seemed to wither and die…but not their finest creation.
Deep in chasms and cracks of the devastated landscape and abandoned ruins the Gardener gatherered strenght top make the land reborn.
Neither animal mold or fungi or animal, it was combination of all. An elegant tool its creators used to cultivate and shape their gardens to their desires. Without instructions it sought to re-create what it served for a Garden of All Life.
Reaching out with its tendrils, its spores on the wind and its roots, it cultivated the plants, protected the seeds it found, changed them to accommodate new circumstances and ordered and commanded the beasts as needed.
It too centuries to regain strength and it took millennia to make land alive again. And with passing time, the Gardener learned of life it never did before, it gained knowledge with every creature it tended too joining it with its tendrils and spores.
With ages passing the scarred land became green again, teeming with life and sound of creatures, given purpose and unity. Only a few understood the aim and care of the Gardener, before relinquishing their thoughts to the bliss of making the planet green again.

A human tribe deep within the Garden. Most humans are joined with the ever-present fungus which dulls their emotions and gives them sense of bliss and fulfilment when enacting desires expressed in often vivid dreams and visions. 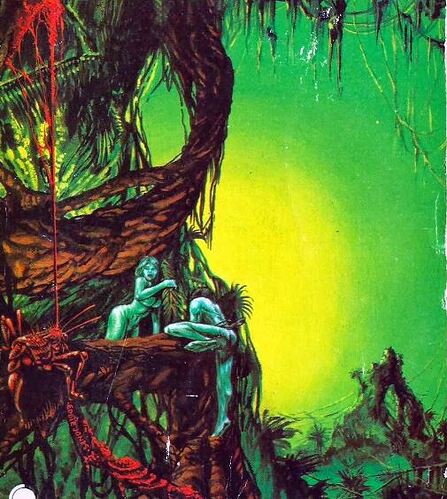 An example of intertwined setting of the Garden, normal flora joined with fungus and mould growths and air full of heavy pollen and spores. 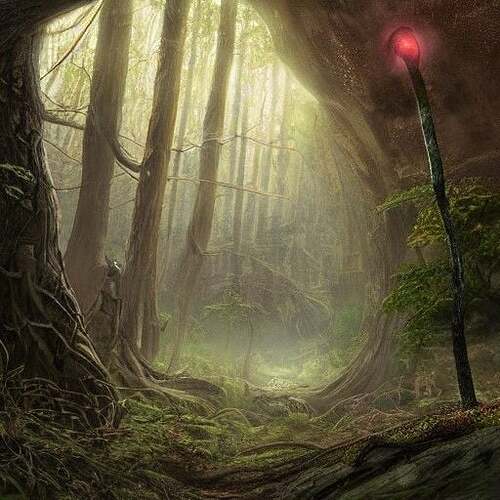 Throughout the Garden the wanderers can occasionally see geometric shapes and even a very crude copies of city layouts.
The entity that shepherds this location over millennia of its existence has developed some measure of psionic abilities, including telepathy and clairvoyance. In some of its visions it can perceive the cities and human settlements of Athas…with humans it has had a mixed experience but utilized them like any other beast in its realm. Nevertheless guided by what it has seen sometimes it grows trees, flowers and plants in shape of what has seen of cities and forts in far away lands. Such creations are not permanent for long. 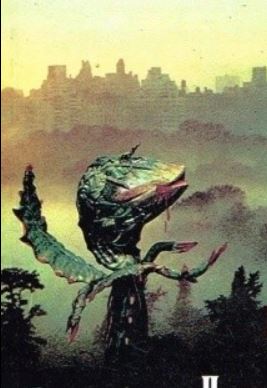 I love the images you found for this!

Thank you. they are taken from
-Hothouse by Brian Aldiss-various covers
-a website I used once which allowed to generate 10 AI images from Stable Diffusion(sadly I lost the access)
-The Fungus by Harry Adam Knight