I have an update on the Moons of Athas blog detailing the Athasian solar system. I cover a few of the different sources.

I’ve been meaning to write this article for some time, but needed to detail out a few things first. On occasion the question comes up asking what we know about the Athasian solar system. Some have speculated that there are no other planets to in the system, or that there were other planets but they were consumed by the sun when it underwent its transformation. Others speculate it is a full system with a fair number of planets and moons.

I figure there may be as many as 12 planets/celestial bodies and provide some info on detailing them out.

Dead worlds make Spelljamming boring and pointless, so I’d advise the other worlds be “even worse than Athas somehow”, but i like it.

If you’re a fan of the rhulisti space program, I see no reason why all of these planets shouldn’t be filled with mutated lifeshaped organisms that would make John Carpenter’s the Thing blush 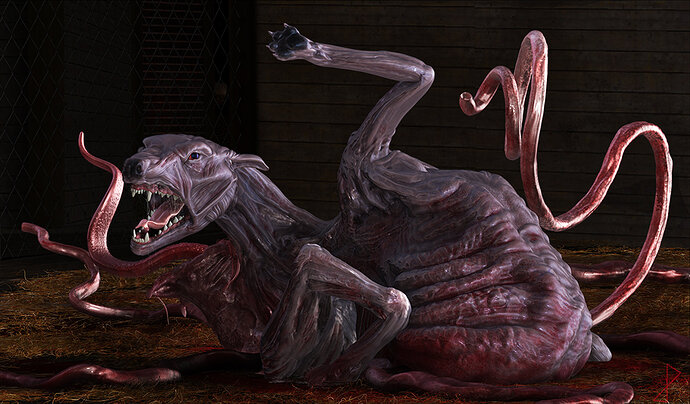 On athas-space spelljamming is impossible. So other technology would be needed.

A dead cosmos and a cosmos full of life are equally terrifying visions. In space living beings can work like necromorphs in games “Dead space”. Or non-material creatures like in " *Ghosts of Mars".

Do any other civilizated planet should exist in other planet in athasian solar system? Maybe yes - sun is big so “Planet V” should have option to have conditions for the maintenance of classical forms of life, so also for creating civilization. Main question here should be - do this will be more similar to our, current Earth or maybe to Earth in glacial period…

This is free thinks.

On athas-space spelljamming is impossible.

No, it’s not. Perhaps you’re only thinking of ‘classic’ spelljamming (using spells specifically), which is of course not impossible in Athas’s sphere using clerical magic.

Also, spelljammers could be using lifejamming helms (that drain life force) or psijammer helms (that run on PSPs, not spells). Both can run spelljamming ships.

In book “Defilers and Preservers:the wizards of Athas” in site 10 we have note

Consequently, travel via spelljamming is impossible,

In book “The Complete Spacefarer’s Handbook” we have note

No spelljammer travels its skies; no ancient tome tells of the routes to its crystal sphere. Whether it is unreachable by spelljammer or merely so far from these worlds that any journey would take lifetimes is unknown.

For me. Lack important sources that some form of spelljammer work in athasspace

The writers of “Defilers and Preservers:the wizards of Athas" likely either didn’t know of the other types of spelljamming helms or D& P simply came out before they were created.

“The Complete Spacefarer’s Handbook” nearly implies that spelljamming could work in Athas’s sphere, as it talks about the impossibility of finding it but fails to say something like: ‘Even if Athas’s sphere could be found, spelljamming there would be impossible.’

I’m definitely not the only one who thinks this might be true, but YMMV (which is fine): The Crimson Sphere

Rovewin, again I am impressed with the work you have put into your article.

I agree with The DMs Revenge, the other planets should be worse.
Perhaps Rajaat was doing something on those other worlds, while his champions were cleansing Athas?
You don’t need spelljammers, if you have psionics and magic to teleport.

I think the planet in the Pitch Black movie is a good example for how a world in athas space should function, not dead but very nearly so, with a very living threat waiting in the shadows.

Another source of inspiration could be Solaris, wher the planet itself is sentient and psionic, but incomprehensible to mortal minds, and so could be considerd hostile. Heck maybe its a great old one in hibernation.

I am also a fan of the Crimson Sphere crossover made for Spelljammer which details Athas Space.

It gets around the problem of spelljamming craft by using Lifejammer helms and giant insect exoskeletons for the ships, and it was intentionally cut off from the rest of spelljamming space in order to protect it from frequent illithid invasions.

And while what they’ve done with some of it is a bit derivative (The Warden Kings are a bit of an iffy concept), IMO it does preserve the feel of Dark Sun in space.

I agree about the warden kings, though the one who tried to shortcut his metamorphosis multiple times and ended as a mutated dragon monstrosity is an intriguing one, though it may need to change (we already have kalak and kalid ma filling that spot). Maybe he is was an early experiment by rajaat into the metamorphosis process, we can even use lynn abbey’s concept of an inevitable dragon transformation for him as a way to still use that idea (since it contradicts the canon for the SMs), and he wasn’t attempting to shorten it but rather halt or control it.

For the update of the Crimson Sphere we’ve just started working on in the dev group, we’re considering the idea of the Wardens being younger lesser versions of the sorcerer kings who have been given as their only job protecting Athas from external threats.

Or that he initially wanted to be a dragon like the SK, but something has gone horribly wrong and now he is slowly mutating without control (he doesn’t really get the magical benefits of the tranformation, just the physical ones with a big side dish of pain), and is desperately trying to halt or control the mutations but each attempt is just making his condition worse

I really like the idea of the warden-kings being overall much less solidified into their positions, unlike the sorcerer-kings of the Tablelands. I think their power struggles being much more life-or-death could add some tension to the Crimson Sphere, alongside giving a reason for them to not really interfere with Athas, like, especially if they’re not as immortal as the surviving Champions

Maybe they shouldn’t be settled folk, like the city-states of the Tablelands, but more like raiding bands that regularly exact tribute from whatever settled groups tend whatever fertile land there is in the Sphere.