I want to gather my equipment lists in a single pdf. This would allow me to print it out, which would be easier for me to reference during game. I would make it available for free, as well.
However, I am worried that I will bundle it up and print it out and then realize something doesn’t make sense, or something very obvious is missing.
If anyone would have the time and be willing to look over one or two of them, I would appreciate it. Let me know where I am wrong. I will add a thank you to the pdf and blog. 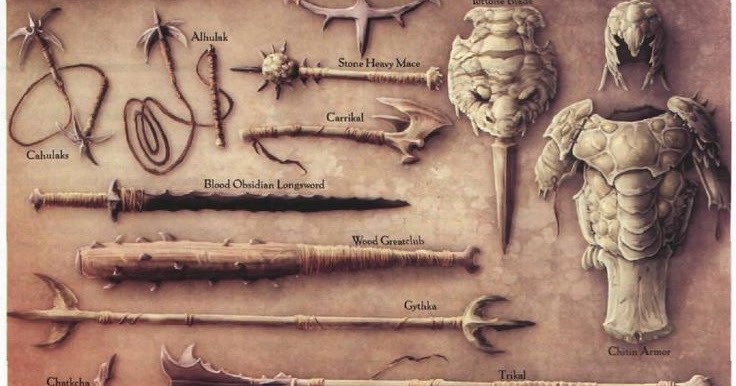 I have a goal of making a comprehensive equipment list for Dark Sun. The books contradict each other when it comes to prices, but I tried ...

I’m on the case. I love lists.

on each table be sure to put the table heading “name wt. cost” at the top of each. You have it on the first list but the others drop off.

Maybe it was the way it was showed up on my phone, but I would widen out the column widths a bit so that they only had one or two lines or words when they wrap around.

I like that you give the description of each at the bottom of the page.

I assume you are looking at prices from 2e sources. I dont know if there was much of a difference between editions. But I will check against 2e material.

One other quick thought before I go deeper. Thri-kreen stuff. Most items in the lists seem for more human like creatures. Have you covered stuff they use besides obvious weapons? Animals:. Jalath gak? Z’ock’n? Transportation: Sledge? Travois? Clothing: harness, bracelets, paint, chitin working tools

Do you have this all in one document? It’d be easier for me to compare with my less separated 2E list.

I have combined the lists into a single list. It is accessible with the link in my first post, at the bottom. Thank you.

Thanks Brent for sharing.

Looks really good so far. I need to see if it/you took the errata’ed prices into consideration once I have a few more spare minutes. Also plan on seeing if there’s anything missing from Aurora’s Realm Catalogue book that could crossover. I’d consider adding a reverse engineered version of the 3.5 armor list that @raddu has one here… and if I ever finish my captured arena animal table I’d add that as well.

Oh! And poisons. Gotta have the poisons added since bards are always selling that in every 2E game.

Errata??? I was unaware, so I have not taken those into consideration. Where might I find such errata?
Thank you.

Scroll down, it’s oddly formatted. The weapon cost changes are towards the bottom.

Thank you. I will look over the errata.

The link may have had permission issues. Here’s a view only for anyone else who’s interested. Errata Sheet, 2E Revised Box DS