A few months ago I saw the movie Groundhog Day, about a man being stuck in a timeloop. I had seen the movie a long time ago, and seeing it again inspired me to come up with an epic spell that is similar to the events in the movie. I made it so that the strangeness of time travel won’t be a factor in this spell, so it can actually be used on a creature (generally to get rid of them non-violently). I could see Oronis casting an epic spell like this on someone.

This spell forces the creature affected into a 24-hour loop in time from which it cannot escape. If the character succeeds at a melee touch attack, the target must succeed at a Will saving throw (DC = the standard epic spell DC + 15). If he or she fails this saving throw, a creature affected by this spell lives the same 24-hour day every day.

The psionic power metafaculty can reveal the affected creature’s location within the timeloop.

The series of events that take place during the 24 hours of the timeloop are the true events. For example, let’s say the creature affected by the timeloop set fire to the Wandering Drake Inn in the first 24 hours but did not do so in subsequent days within the timeloop. When leaving the timeloop, the inn would have been burnt down at some point in the past.

While in the timeloop the affected creature is under magical compulsion not to take actions that could lead to an escape.

As there are supposedly no groundhogs on Athas, you should call it jankx day 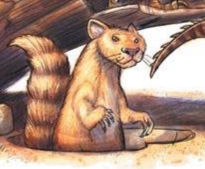 I’ll probably come up with some flavour text for this psionic enchantment. I’m thinking that this isn’t actually an offensive spell.

Eliminating someone from the time-stream is just the uber version of a Maze spell, so its totally an “offensive spell”, IMO.

Yes but the intentions are important. Also, perhaps Oronis has a plan B in the event that he can’t save Athas, or if Kurn will soon be utterly destroyed.

Meh. You can use a fireball to melt a wall of ice to give thirsty people water to drink - doesn’t change what kind of spell fireball is.

If you want to say intentions are all that matter, fine - but then describing anything as a “offensive spell” or not is relatively pointless.

I’d generally consider any spell that you cast on others to remove them from your “way” as offense, spells you cast on your self to prevent damage as defensive and anything else as utilitarian.

Athas is a harsh place. There is very little reason to use this spell on someone when a Hellball will suffice. Some flavour text will be forthcoming that will perhaps make this epic spell more sensicle.

Eh. Why use Maze when there’s Delayed Blast Fireball, etc? There’s dozens of reasons a person might have or use one spell vs. another.

Add the text all you want, that’s always cool (and I’m not here to tell anyonewhat to do), but worrying about why spell X exists when you could disintegrate someone (or whatever) only leads to madness.

Add the text all you want, that’s always cool (and I’m not here to tell anyonewhat to do), but worrying about why spell X exists when you could disintegrate someone (or whatever) only leads to madness

Perhaps this spell is a proof of concept. Think about it - if you can create such a scenario for a single person, why not an entire city-state? Maze has no possibilities that might be helpful, nor does a fireball . Both of those just lead to death.

Oronis places a single person in the timeloop in such a manner. Since this is possible, then placing the entirety of Kurn into the timeloop is also possible. The difference is merely scale. conceptually we are talking about the same thing.

In such a case, might it not be possible to force his entire nation into a timeloop, thus circumventing this destruction? The timeloop could operate on the basis of an entire month, instead of a single day (resetting monthly). Like a single person in the timeloop, the people in it would remember everything that happens.

In this iteration of the spell, Oronis would likely include a failsafe method of killing someone within the timeloop. Likely this would involve some sort of magical token that could be worn, and if killed, that person would die and exit the timeloop. The main purpose of having a failsafe would not be for executing criminals, but for people who are terminally ill and suffering. Those people in a timeloop, being actually subject to the spell instead of being the scenery as in the single person version of the spell, would suffering for eternity. So there would need to be a way for these people to opt out.

In this manner, Kurn would persist. The destruction of Kurn, whether it be by natural causes, the Dragon, or the Sorcerer Monarch’s armies will never come from the perspective of the Kurnites. After the spell takes effect, visitors to Kurn will find the city completely empty, like Machu Picchu was found abandoned and intact.

Of course, Oronis needs to understand how people will react to such an unnatural modality, so he places corrupt templars into a timeloop, and observes them via a special kind of scrying. He wants to know if the people affected will descend into utter nihilism, or whether they will healthily adapt to their new circumstances.

Plan A is to complete the transformation into an avangion, get the Dark Sun lens somehow, and save Athas. If it’s impossible, then Oronis will simply try to save his people by putting them beyond the bounds of time for eternity.

It could also be used as a “humane” way of removing someone for awhile or a way to allowing criminals to be reformed. There’s a number of uses I can think of for the spell at this point.

As an aside, I don’t think Oronis WANTS to complete his transformation. The other SMs are afraid of each other and of losing their minds like Borys did. Looking over the spell criteria, even back in 2e, there’s no reason Oronis wouldn’t have been through the entire transformation in a comparatively short period of time. He’d certainly be further along than he is now… but when you take into account how much he changes, how human he would no longer be, I could easily see his sense of self and his basic humanity fading away. He took a lover simply to try to remember what it was like… I’ve always thought of him as scared to go further than he has. He’s Paul unwilling to take the necessary steps waiting for a Leto.

Interesting ideas. I updated the description to clarify certain questions that may arise in gameplay

I will obviously suggest that it be a psionic only epic power. No need for magic.

Moving past the obvious, I had a few thoughts.

FIrst, a time loop effect is most useful if the target CAN gain XP from the experience - as there are few other mechanics within the game that allow for character advancement which is not tied to XP, and those are so optional that the character may lose transplantability (moving from one DM to another DM) if used.

I suggest two limitations, however.
Limitation A is that while allowing XP is a good thing, that it should also be a one time gain per given situation or circumstance or encounter within the loop. Alternatively, an enterprising DM might assign a prize pool of XP to every encounter, and only award portions of said pool tied to specific achievements within the encounter.
Limitation B is that only the XP accumulated on the most recent loop comes out of the loop with the player.
This replicates the mechanical effects of learning from the timeloop, while limiting it to what one can achieve in a single day (or month).

Second, I’m not sure I see the point of allowing the external passage of time, or the compulsion to not escape. I suppose this makes the effect more of a prison type thing. There should also be a method to escape detailed within the effect that is not dependent upon a saving throw.

Third, what about information? A timeloop is a great way of gaining access to information that would otherwise be impractical to obtain. A lot could be gathered within a day’s time.

I note that given that this is basically a prison effect, it can theoretically be replicated much more cheaply with a Suspend Life and Microcosm effects combined. No need for epic at all.

The reason why I didn’t allow XP in the timeloop is because it’s the most glaring exploit for something that could be a punishment. Also -

Third, what about information? A timeloop is a great way of gaining access to information that would otherwise be impractical to obtain. A lot could be gathered within a day’s time.

Correct. This is the other major exploit, but it’s sanitized because -

Second, I’m not sure I see the point of allowing the external passage of time, or the compulsion to not escape. I suppose this makes the effect more of a prison type thing. There should also be a method to escape detailed within the effect that is not dependent upon a saving throw.

A lot of the information obtained may be rendered irrelevant by the passage of time in the world of normal time, and a creature can’t seek to escape anyway.

I guess I’m hung up on the idea inherent to the Groundhog Day / Mother of Learning (month) concept… that one can in fact learn and obtain skills therein which perpetuate over loops and are not lost in the next loop, nor lost when the effect ends.

So I have bias towards keeping that idea.

That’s ok, it’s just a fundamentally different concept. Try your hand at whipping up an epic psionic power to do it.