High Sun, Solargraphy, and Location of the Tyr Region

On Athas, the summer solstice is also the first day of the year according to the most common calendar throughout the Tablelands. This day is Dominary the 1st and is referred to as the Highest Sun.

I recently learned about a method of filming the path of the sun on a daily basis to plot the movement of the sun against the sky through the year. This is called solargraphy. It’s typically done over several weeks or months with a pinhole camera pointed toward the direction of the sun. The result will plot the course of the sun in the sky. If started on the summer solstice and ended on the winter solstice you will get a neat plot of each day with the sun’s position clearly marked. 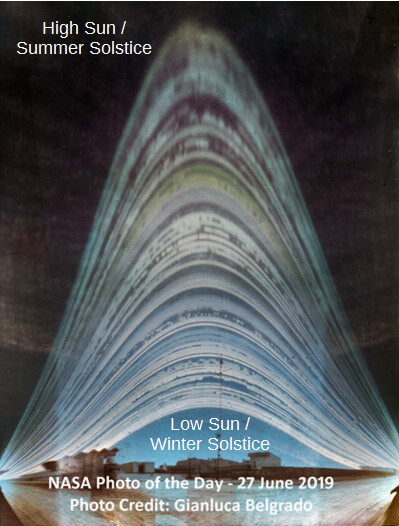 You can imagine what this would look like if done on Athas and it gives you a better idea of what Athasians would understand as High Sun and Low Sun.

There are some pretty simple equations to calculate the position of the sun at varying latitudes for the solstices and equinoxes. You just need two pieces of information: your latitude and your planet’s tilt.

I have a fairly in depth look at these topics on by blog.
Check it out.