Map of Archipelago North-East of Cromlin

Here is a map of the small archipelago North-East of Cromlin. I intend to use it for a campaign based in this merchant village, as a hideout of pirates with an obsidian engine powered war schooner (on the two northernmost islands).
There are three levels of silt depth : shallow (for beastheaded giants and silt skimmers), intermediate (for plains and desert giants, and maybe for silt skimmers with unusually large wheels), and deep.
The dark brown area between the two northernmost islands is a small mudflat. Beastheaded giants live on three big southern islands.
The black thick contours of some parts of the island represent cliffs, and the small crosses represent reefs. 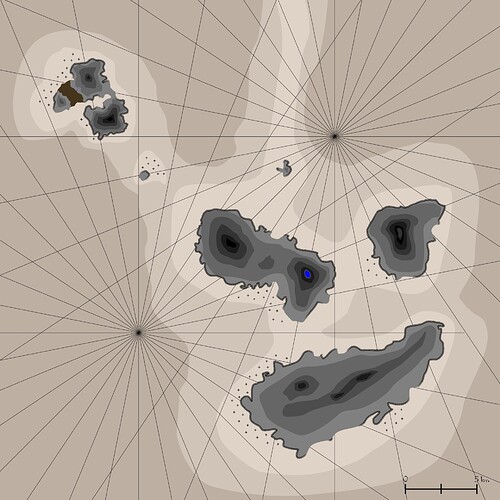 Where there is no outline around, is it beaches or it could be something else (from your point of view)? I suppose a topographic map which means the darkest it gets the higher are those hills/mountains. So, how do you explain the lake at the top? I don’t know the scale, but shouldn’t be higher to clear the heat effect?

When there is no outline, it is beaches or relatively flat terrain.
The lake at the top of the mountain is a crater lake (there is a small lighter rim around the lake).
What do you mean by “heat effect” ?

Forgive my ignorance, but do the 2 sets of radiating lines represent anything, or are they just there to add visual appeal?

Also, is this to represent/ replace the mountain(s) out in the silt directly east of Break Shore?

If it’s really hot (as in athas) closer to the ground, if it’s not enough high in altitude, woun’t it evaporate more easily? Unless there is another reason?

I imagined it was a volcanic lake, fed from underground. It surely couldn’t stay full from rain…

Interestingly City by the Silt Sea might provide some possible names for said islands:

"I met Kataal in haunted Giustenal, amid the ruins and silt and shadows. He was a voice, a presence, a creature of the Way whose Will remains strong even though his body has faded.“Who are you,” I asked. “Kataal,” he answered. “Kataal the Mover.” He spoke, but his words were silent to my ears. My mind heard them loud and clear, however. “Where may I send you,” he asked. “Have you come to visit Vakura or Pelcunal or splendid Liuss?”

“Kataal the Mover, once a halfling from the Green Age, still controls the psionic transportation system in this tunnel. In the distant past, the psyche would whisk travelers to the island settlements of Vakura. Pelcunal, and Liuss”

The two sets of radiating lines are just there to add visual appeal. Old maritime maps often had those.
They are indeed to represent the mountains east of Breakshore.

That was the idea, a volcanic lake fed from underground.

Interesting, I didn’t know of this citation. Could be the names of the three larger islands, which should have ruins.

I’d say only one or two of them - any number of islands were submerged by the silt (see Tarelon, Ebe, etc) so it would be cool to keep something back for undiscovered/submerged locations.

If other nearby islands were completely submerged, then it follows that these islands could be high spots from one or more larger (lower-lying) islands.

The shallow silt connecting the three could be the old island’s lowlands. Many ruins could dot the silt there.

You could give the three islands old names that were the names of the mountains/hills when the island was exposed (in the backstory - solid chance no one but immortal beings would know the old names now - unless they found an old map).

I wanted to add a “map” tag, but didn’t find how to. Is it administrator stuff ?