Does anyone know of any maps or information on the ruins of Yarmuke or Khalidnay?

Maps of Kalidnay are in DSM2 Merchant House of Amketch, with another in Ravenloft supplements Forbidden Lore and Domains of Dread (and reproduced below): 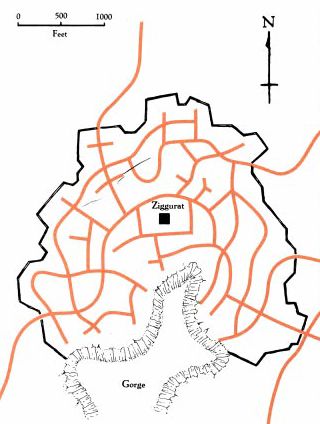 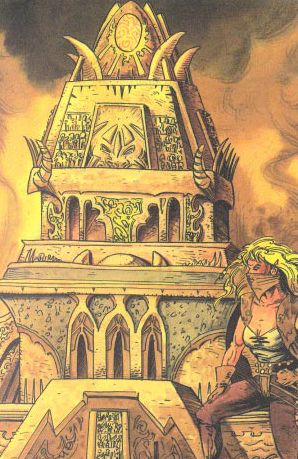 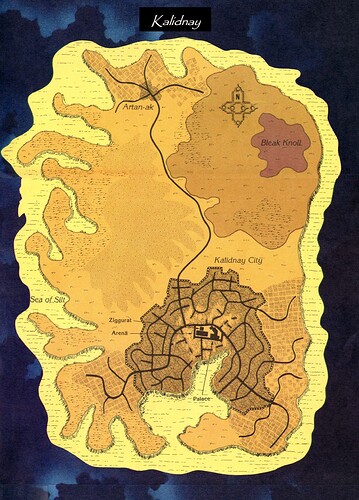 Yarmuke is ‘detailed’ in DSM1 Black Flames. The map is…fragmentary at best given the general destruction of the city by Hamanu

There’s that BWoA adventure, Return of a Sorcerer Queen (marked for eventual update), which may have further useful details on Yarmuke.

Thank you so Much!!!

I made one, but it was pure homebrew – I had an acropolis and a lake with black water next to it, as well as a resettled area on the outskirts.

I might have to do the same thing. Any tips?

Here’s some of my stuff if you want to look at it for inspiration. The first one is the city map itself. The second is an area overview. The third is a compound in the financial district that used to basically be the central bank but was taken over by a faction from Ballic (long story, I can get into it if anyone’s really interested).

My version of Athas was heavily influenced by the Alternity franchise from late 1990s TSR, and I also connected it to Monte Cook’s Arcana Evolved universe – the Stoneburner’s are a progenitor alien civilization in Alternity that are described as squidlike and highly psionic – I saw these as the source species of illithids, pslurons, neogi, and similar creatures. The lore around Kalidnay was closely connected to the idea that Stoneburner artifacts – the black obsidian orbs and related items – were identical to the tenebrian seeds of AU and connected several worlds or time periods. The ‘obsidian’ was condensed ‘black oil’ which worked like the black oil in X files and the Xenomorph films, and was the basis of Stoneburner biotechnology. 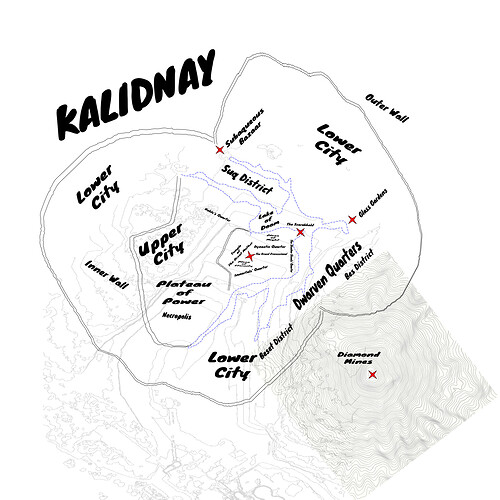 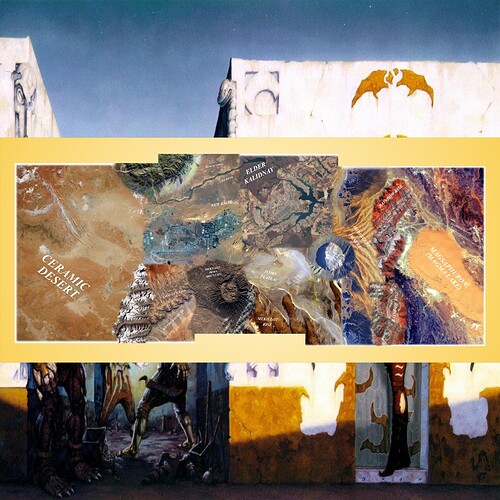 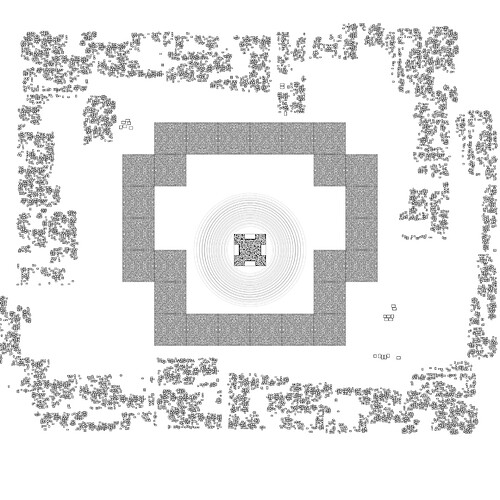 Amazing! And I absolutely love the black oil concept! One of my players has been wanting a psionic skin forever. This might be a perfectly sadistic solution!

The other thing I did with the concept was based on the I’krl Theocracy from Stardrive – I had the idea that certain Stoneburner’s had their god like consciousnesses sealed in obsidian pyramids that functioned like Leviathan in Hellraiser – they emitted black beams that caused mutations, and these monoliths lived in a labyrinth like pocket dimension and were worshipped by their followers.

In my version of Athas – the original life was all insectile, and the ‘offworlders’ brought various client races to Athas, including the rhulisti. Defiling and preserving were both basically ‘sufficiently complex science is indistinguisable from magic’ and were sort of like the light and darkness concepts in Destiny – paracausal forces that were still basically scientific in nature.