Are there any little mini games you guys use in your campaigns… gambling, carnival, etc? I’ve done card games a little… I was thinking about the Caravan game from Fallout New Vegas, that would be cool to add, but tough to play on a online ttrpg provider.

Hawke’s Gambit from the Tribe of One series. It was a gambling dice game that uses all the sided die. My pcs played it all the time at the Crystal Spider when they return to Tyr.

To clarify a bit, instead of a hoard, there is the prison, and instead of the tokens representing gold, they represent the tribute. If enough tribute is not paid to the prison, everyone loses. But you also have to end up with more than everyone else at the end in order to win…

Thanks for the ideas

There was a thread about chess and games before you might mine for ideas.

Here is one I am aware of.

This two player game begins with a board created from four six-inch sticks of equal size. Two of the sticks are placed on the ground side by side with a two inch space between them. The other two sticks are laid across the first two, the same two inch distance apart, to create an “octothorp” shape, or “hash mark”, thus creating nine equal squares inside.

The players then choose a color of stone they will use for the game and who will go first. Who goes first can be decided any number of ways, but typically is the winner of hand to hand combat between the two players, especially if both players are thri-kreen. The first player places his color stone inside any of the nine squares. The second player then takes his color stone and places it in any of the other available squares. Players take turns placing their color stone in a square until one of the players gets three of their color stones either in a row horizontally, vertically, or diagonally. That player shouts “Tik-chat-cho! three in a row” and is declared the winner.

If all squares are filled, and neither player has three stones or their color in a row, neither player wins and the game is declared a tie or a “g’at”. When a tie or “g’at” is declared another game is played to determine with winner of “Tik-chat-cho”. Who goes first for that game is again determined by hand to hand combat and then play begins as normal.

My players are locked in a war with the Thri-Kreen, so it would probably never get used, except in the case of outcast Thri-kreen befriending the characters. Every clutch has one outcast that seeks to understand other races, so it is possible it could be added in that way…

A game popular throughout the Middle East, “first played in ancient Mesopotamia during the early third millennium BC.” 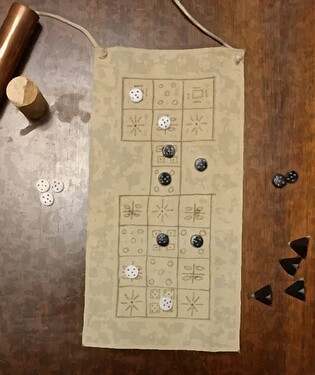 I made my own “homemade” version (similar to the one pictured) using scrap leather, white and black stone pieces, and extra d4 dice I had on hand (sanded down and painted).

I turned this game into into a game the characters were introduced to in a Tyrian wine shop during one of their sessions. The players spent about an hour playing several rounds and enjoyed it greatly. It was fun for the players to immerse themselves in their character’s experience, and it provided something a bit different from the usual role-playing. It also created a segway adventure because of some gambling that eventually occurred with a shady elf merchant.

Yea Ur would be great for Dark Sun. Unfortunately, my players weren’t interested in playing mini games when I pitched the idea to them… They did play a round of 3 card poker early on in the campaign, but they lost interest quickly.