I mean, its pretty on the nose - a hybrid that’s stronger and has more endurance than either of its parents, born for labor and enslavement?

Yeah, those slave-masters: you’d think after all the slavery, forced breeding and likely death of the mother, they’d be chill about naming the result.

Lol, at least mule is IRL not a slur that I’m aware of…

Lol, at least mule is IRL not a slur that I’m aware of…

Lol, at least mule is IRL not a slur that I’m aware of

There is the old (oft considered racist) term “mulatto”, which I’ve heard is similarly historically derived from the word mule.

However I do strongly disagree with the 4e statement:

“Given the derivation of the name, sages who care about such matters regard mull as the most accurate pronunciation.”

As a “sage” who does care about such matters, I regard “mool” as the most accurate pronunciation.

However I do strongly disagree with the 4e statement

You’ve got to wonder why, in the game world of 4E Dark Sun, the pronunciation “mule” would be considered derogatory if mules literally do not exist on Athas.

It’s about offending players is it not?

The Pentad audiobooks have mul as in mol-estation.

That’s not what I heard when I was listening last week. In Cerulean Storm, they said mul as in mulled wine.

They sound the same to my ears

I’m not an expert on English pronunciation, but here is a diagram of English vowels with their pronunciation with b_t. You can do the same for m_l.

I think the audiobook is saying it at the “but” location. (what Neujack hears) whereas Pennarin hears at the “boat” location. I content the original pronunciation was intended to b at the “boot” location.

It’s too bad they don’t show where “butte” would be, cause that is where “mule” would be. 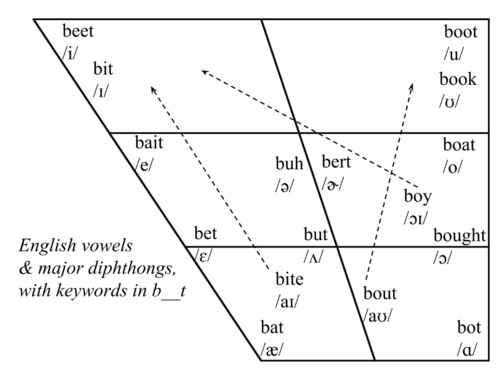 Are people from some regions conflating these pronunciations with each other? All of them are pronounced differently to me.

You know what? Someone post the relevant audio online from the audiobook with the pronunciation of mul.

Some people are unable to hear certain language sounds (ie: phenomes) and pronunciation due to a lack exposure during the formative years, a lack of training, or due to an actual neurological difference.

There are estimated (by some counts) approximately 800 sounds (600 consonants and 200 vowels) found among all the languages currently recorded in the modern world.

Most people can only hear (perceptionally recognize) between 30-40 of those sounds. For example, on the high end we have the Taa language, which has around 100 sounds (~80c/~20v), and on the low end is Japanese with around 22 sounds (17c/5v). By comparison, English usually clocks in at about 44 sounds (depending on which version and region of English you speak - some versions of English only count around 36 sounds).

You know the references about how certain Asian populations can’t distinguish between L and R? That’s not a joke, many literally cannot hear the difference.

I have personally experienced another person’s inability to hear the difference between S and ß.

Thus in conclusion, you are all probably correct… from your own perceptive point of view.
(Note: usage of the word sound in this post is intended to mean phenome, not general sounds, such as music, noise, animals, etc. )