I’m currently delving into psionics to understand the system and shape in a way that feels more in tune with the setting, and perhaps my own sensibilities. I’ve had some issue with the names of the Disciplines and the names of primary practitioners of those disciplines. It seems to me with such a deep history and so many imbued with powers that there should be a whole philosophy (probably more than one) surrounding the use of the way and terminology that is specific to the setting.

I was wondering if anyone has any alternate names that they use for 6 Disciplines or for their practitioners? In particular I find the names psychoportation, psychokinesis, and psychometabolism problematic, and the term egoist seems to fly really wide of the mark.

These are mostly pretty awful alternates (in parentheses), but I’ve got to start thinking somewhere.

I was also looking at how the disciplines relate to each other and where the boundaries/points of contact are between. With the original 5 (sorry, metacreativity) it seems like they form a pentagon with metapsionics in the middle like the attached image. 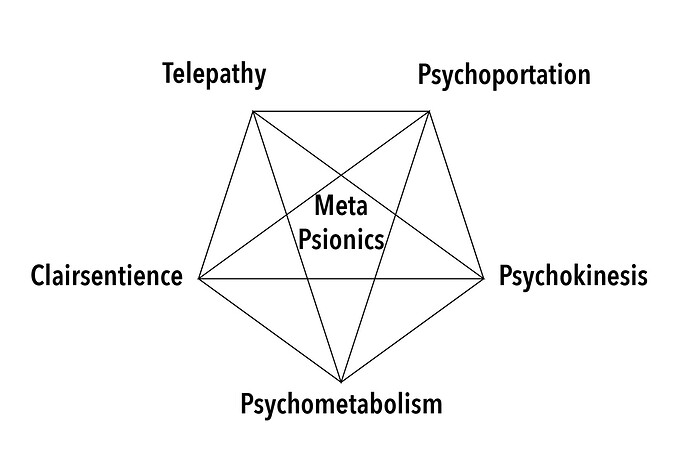 I love the psionic pentagram, although I’d be curious how you picked the boundaries/relations.

I also like the idea of psionic names that aren’t modern pseudo-sciency. I actually think telepathy/telepath and augury/seer work really well, but I don’t like the psycho-disciplines.

I actually think mindbending/mindbender/floater both work well for psychokinesis. I think calling the discipline itself telekinesis works better than psychokinesis. Or even kinetics/kineticist. The Force only makes me think of Star Wars, so doesn’t get me away from science fiction.

For psychometabolism, the sensei kit is a really good one, and I don’t hate metabolics/sensei. Yogi is actually really close but has connotations of Lululemon fitness culture that doesn’t totally feel right.

Vanishing or even teleportation as the practice. I kind of like sojourner as the practitioner. It means traveler or itinerant but isn’t closely associated with something more specific than that.

Metapsionics I’m a bit stumped. Although nobody else is technically a “psion” so it might work as the meta-practitioner of the craft…

I’m a bit stumped too but love the idea of trying to come up with something better.

Here is my updated schema which names different students of the way based on their alignment to the disciplines. There is some insight into connection between them in it. I do like your ideas for some of the names, still playing around with ideas I have a few others I could use somewhere that aren’t in this schema as well. I also figured that different cultures might have different understandings of the different paths and roles of the way, so I wanted a decent universal starting point that sounded less modern. 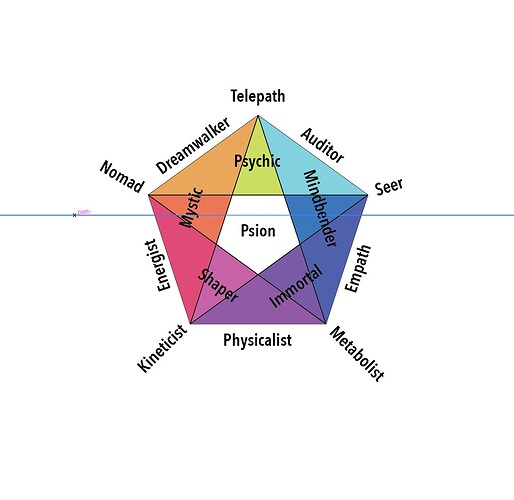 Also as a very basic schema that could be used by tribal people, those unlearned in the way, or maybe as a particular cultures understanding I like the idea of associating the 6 disciplines with aspect of the person, so you would have something like the following:

I also like the idea of representing the way as a hand with 5 fingers and a palm. This could be favored by monks/martial artists In that case I guess I would have it set up like this:

Some ideas about the different sort of psionics careers or roles that exist in the tablelands with some thought to how that relates to the disciplines and my charts. Trying to identify and fill in roles. It seems to me like there wasn’t enough effort put into integrating psionics into Athasian society and culture in the source material. I would love to hear anyone else’s thoughts on the roles that psionics play in the city-states and wastes and how it impacts Athasian society.

Auditor - Psionic investigators rigorously trained in Clairsentience & Telepathy. Auditors who also delve into Psychometabolism may also act as interrogators, while those who dabble in Psychoportation can act as far ranging agents or covert recovers of high value stolen goods.
Psionic Beast Master - Handlers of dangerous and untrainable beasts for merchant caravans and
the arena or occassionaly for hunting sport or the defense of noble estates, psionic beast masters
are rigorously trained in Telepathy and Psychometabolism so they can understand and control their charges, and heal injures to themselves and their animals. Minor Clairsentience tends to support these abilities to better sense danger or track missing animals.
Ship Floater - Masters of Psychokinesis, ship floaters, are vital to trade along the sea of silt. Mosthave a secondary focus in Clairsentience in order to act as effective navigators as well, both charting a proper course and avoiding the many dangers of the dust. Smart ones may have a Psychoportive ace in their pocket for escape, or a Psychometabolic one to survive being stranded in the harsh and alien environment.
Sentinel - Very similar in terms discipline focus, Sentinels act as tactical support, early warning systems, and defense of strategically important structures and locations. They can be found employed
by many merchant houses in defense of forts or merchant caravans, but are most common in the region surrounding Balic and their client villages to defend against Giant attacks. Both Hammanu andTecktutilay also employ a large number, with Hammanu’s force being referred to as Battleminds andTecktutilay’s as Eagle Warriors.
Empath - In tune with the life force and pulse of living creatures including of course other people,capable of healing, bridging divides and making peace. Empaths may be pure of intention acting as diplomats and envoys. The reverse is of course manipulation, gamesmanship, and the capacity to cause subtle harm and disease. This is a common path for nobles to learn especially in city states where telepathy is severely regulated, it is also a common path for the bard/assassin and other covert agents of the merchant houses. Empaths usually have some small measure of Telepathic training which theyuse cautiously.
Psionic Slaver - As terrible as it is, there is a significant demand on Athas for Psionic Slavers to handle particularly dangerous and difficult slaves and to act as a backstop against rebellions. These individuals also act to capture and control criminals pending interrogation and possible execution. Psionic Slaversfocus on a combination of powers used to subdue and control people typically Telepathy, Psychokinesis,and some measure of Psychometabolism.
Envoy - Envoys are masters of communication delivering important messages and high priority packagesas well as serving as representatives of Major Trading Houses, the Sorcerer-Kings, and Powerful noble families. They specialize in Pyschoportative powers followed by Clairsentience and Telepathy in smaller measure.
Dreamwalker - Seers and mystics with a air or voodoo or shamanism about them, dreamwalkers
are practictioners of the way among the people of Gulg, the Halflings of the Forest Ridge, certain Elven
tribes and other tribal peoples. Skilled Telepaths, Nomads, and Seers, Dreamwalkers alternatelyknown as Greywalkers and Psychics, specialize in psionic powers that relate to the ethereal, astral, andrealms such as the black and grey, as well as psychic impressions, residue, and precognition. They are known to enter people’s dreams and battle demons therein or bring powerful visions.
Kensai - Apart from the many state sponsered schools of psionics, there is a parallel tradition of remote monastaries and hermit masters known as Kensai. Their training is more varied than many of the other roles with different masters following different paths, but there is a universal rooting in discipline of the body and mind which connects to martial arts and yogi style practices. Survival, self-sufficiency, and self-mastery are fundamental tenants of all Kensai. Kesai have a more spiritual bent than most other practictioners of the way and can almost be thought of as a sort of psionic priest.
Shadow Dancer - Less commonly known than the Elemental Singers of the elven tribes, are the Shadow Dancers. They tend to be associated with whatever elemental patron the tribe reveres though they are in truth something more akin to powerful wild talents that have followed the intuitive elven path of the way. Though not common these individuals have a unique mastery of time, space, and trickery well suited to the elven lifestyle and spirit. They are always foremost masters of the Psychoportative arts, with only a smattering of ability in other disciplines, manifesting powers such as Chameleon Skin, Danger Sense, False Sensory Input and others more focused on evasion and trickery than anything else. They make ideal thieves and assassins.