I’ve always been underwhelmed by the Pterrans as an addition to Dark Sun. Now on the surface, I will grant they seem to be a good fit.

· They fit the reptilian theme. There was no playable reptilian race for Dark Sun at that time.

· They do have innate psionic abilities which fit the setting.

· They were foreshadowed by a Monstrous entry.

· A race with a focus on diplomacy does fill a role that DS races didn’t offer much of at the time. Some but not a lot.

· Very different social structure than others in the setting.

So on the surface, their biggest strength is that they aren’t redundant. Bit of a backhanded compliment, but a compliment none the less.

HOWEVER, I never really liked them. There are many reasons for this.

· Yet another surviving race from the Cleansing Wars calling into question the effectiveness of the SK and Rajaat.

· Their homeland and social structure is way too idyllic for Dark Sun. I am not saying everything needs to be a dystopian hell hole, but there is very little in the way of conflict or interest. For example, a caste system that is mandated by a corrupt elite who view it as a social control and who base it on garbled info from ancient ruins and have fanatical enforcers, that is interesting. An entirely voluntary one? Not so much.

· Their reasons for their initial isolation and then re-emergence always felt weak to me. I can understand holing up in a favorable area during the Cleansing Wars. However, a Great Quake activating a prophecy doesn’t strike me as compelling. I think it would be more interesting if the Quake destroyed a vital resource for the pterrans. They are sending out diplomats to either secure a new source, or figure out where they can migrate. Real stakes.

I can keep going, but I think I have made my point. Pterrans feel tacked on to me, and feel tame and unchallenging.

Part of the issues with Pterrans is that they have the Prism Pentad post issue. It’s where the first priority for anything the writers where adding to the setting was “explain why they weren’t involved in PP.” Not “how do we use unique elements of the setting” or “make it interesting.”

Here are two races I think would have made better additions to the roster of reptilian characters.

Jozhal. You can look up the monstrous entry on them, but to keep it short they are small, desert dwelling thieves.

· They have always been in Dark Sun, since the beginning. Nothing about them or the setting need be changed to make them playable and make sense.

· They are clearly intelligent. For example, there was one high up in the Veiled Alliance in Balic.

· The only drawback is that outside of the PP they got no development. No ruins, history, exploration of their culture. A lot would need to be created.

Dray. I especially love these guys for their origins. They are expressly created by a major power to serve a specific purpose. This is no Pristine Tower accident. While they start isolated, they are destined to march with Dregoth to lead his twisted crusade. Why they are isolated makes sense and why the isolation ends does as well. They have a fully developed culture and history. I can go on.

So…why weren’t they brought in as a playable race with the new box set? And no, calling dragonborn “dray” in other editions does not make up for this.

· Some of their unique elements pose a challenge. For example, there is only one known dray point of origin. Two settlements, one for first gen and another for 2nd gen. Both are highly secretive, ruled over by Dregoth and deeply indoctrinated.

· No known presence on Athas until Dregoth’s invasion.

· Any player running a dray (1st, 2nd or someone transformed into one) would need fairly extensive knowledge of a major secret of the setting.

Some imagination can easily fix these problems.

· Timeline might solve all of these problems. If Dregoth as already started his invasion, then dray have emerged in force.

· If players already know about it, and are able to RP their characters not knowing, then one can easily play as an explorer, emissary, spy or exile.

What do you think? Want to tell me I’m wrong? Go for it.

There is also the nikaal as yet another reptilian race.
You could argue that there is an over abundance of races in athas, not just reptilian ones but in general. I think its part of the charm of the campaign, three generations of race (halfling and kreen of the blue age, the green age races of the rebirth, and the new races of the pristine tower+ arcane experiments) Coming one after the other and trying to gain a foothold in an increasingly hostile world, but without development most of them fall short of being interesting and are basically redundant.
We should try and remedy that, and your suggestions about the pterran culture are a step in the right way I think

I’m not against the Pterrans (and am playing one in a game soon), but you’re right about the weakness of their background/ motivation - not that it matters once play starts. Maybe a lake that drained away or a mine that collapsed with the Great Quake would be better, but then we’d just be complaining about how thr Great Quake endangered ANOTHER civilization, “ho-hum”. But, yeah.

Jozhals, yes! They always struck me as just needing some character development to a PC race.

Dray? Could be spies or 1st Gen. runaways - as long a Dregoth never comes up, it won’t matter what they know…

I do like the Pterran as a race. I like their background, but I agree that it would need a little addition. Although, I see the Jozhal more like the Warhammer Skaven; some kind of scattered race. As for the Nikaal, I like the fact that they aren’t much explained. They are a nomadic trading race and they are enigmatic. I’m ok with that.

Best motivation for the pterrans are they’re looking for an alliance against the coming kreen invasion.

I’ve forgot about ssurrans! Another reptilian and trading race, plus they are fire proof.

That implies/ presupposes a fair bit of in-unviverse/meta-plot knowledge, but that does sound like the best plan.

Does it though? Lost Scale isn’t far from the rift.

I feel like it does, but maybe not. The space between known impending invasion and currently occurring invasion feels pretty tight - i don’t see the Kreen empire screwing around, but rather pouring out like a horde of ants with supply trains behind.

Maybe that’s just me though.

Is splitting hairs between “looking for an alliance against the coming kreen invasion” and “worried about incursions by strange Kreen coming from a weird new place” overly pedantic?

But i feel like one implies a lot more immediacy and knowledge than the other; other than that, yeah, sure.

There is also the nikaal as yet another reptilian race.

I’ve forgot about ssurrans! Another reptilian and trading race, plus they are fire proof.

As for the Nikaal, I like the fact that they aren’t much explained. They are a nomadic trading race and they are enigmatic. I’m ok with that.

Between the two I prefer the ssurrans. There is “mysterious and enigmatic” and then there is “undeveloped.” The nikaal should have had lot more to them. Ssurrans we’ve got more to work with. And with them not having a homeland, that works even better. Not saying nikaal are terrible, but almost anything about them is fan made.

i don’t see the Kreen empire screwing around

Yeesh, the Kreen invasion is a whole other can of worms. That’s not a different thread. It’s a whole sweater. I do prefer the missing critical resources idea. However, I can easily see the pterrans seeking out alliances just in case. And then finding that alliance tested way sooner and harder than expected. Different groups could even accuse the other of knowing about the surprise invasion…

I see the Jozhal more like the Warhammer Skaven; some kind of scattered race.

not that it matters once play starts.

Jozhals, yes! They always struck me as just needing some character development to a PC race.

I wrote up both Jozhal and Pterrans for my current 5e games as player races. The pterrans feel like a version of lizardfolk and not my favorite but I particularly enjoy and like the jozhal.

Ssurrans and nikaal and any others could be written up but I think that would be particular to the DM and the player. A DM will prep what they want and if a player brings a particular desire to the table, they will accommodate and probably make some shit up (I would) and encourage the player to help fill in those gaps too.

Though it’s not really necessary to go backwards. You can just play a jozhal with these abilities and no go into the history of the race, much of that is lost for many races in the current age.

You wanna play a Jozhal! Go for it. Your people have an elaborate and ancient history, and one of the SK was secretly a Jozhal. However, you are completely ignorant of all of it and it’ll never matter in the campaign. Go steal the shinies!

I read a really nice writeup by lawfulstupidrpg on these races for use in 2E. 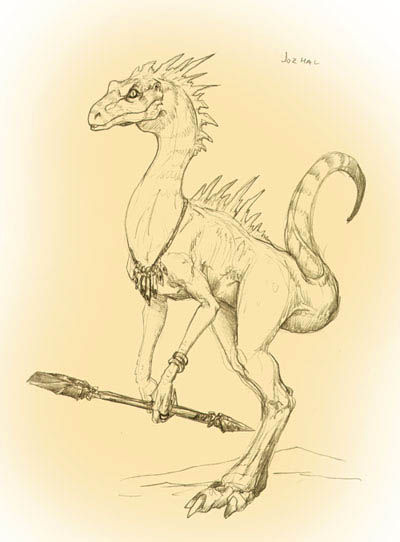 Athas features many races beyond those detailed in the Dark Sun core rules. This blog takes a look at the jozhals – diminutive reptilians with a love for magic. A pdf at the end of the blog also covers several other new races, including dray,...

the drawing makes me wonna play one

Hey, that’s my blog! Cool - thanks for sharing

I did another couple of entries with new kits for all the races too, at the same site.

I looked at it a bit, good stuff!

Thanks for all the cool write-ups on your blog. It has really helped me ease back into Dark Sun over the last year when exploring 5E options (even though these were all 2E).

Cheers! Glad they’ve been of use

I currently have 2 Ssurran PCs in my 5e Dark Sun Campaign. It has made for some very interesting play so far, You guys are also overlooking the silt runners. A guy made a great conversion for all the reptile races recently I have a copy of it, I will try to find it. My Ssurrans are not like his though, and they aren’t “fire proof” but have resistance to hot climates, not needing as much water, etc.

Hey Jason, curious about your write-up but the other one you mention is by @Kamelion on his blogpost I linked to above or not?