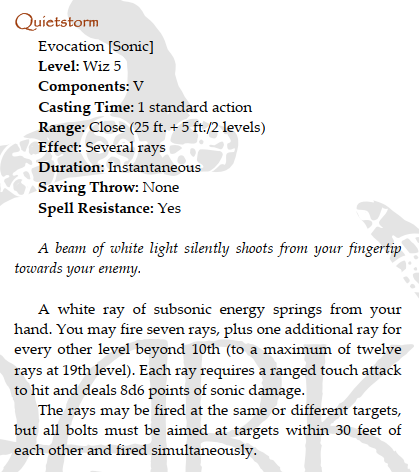 I think something like 352 hp damage @ 14th lvl if using Maximize Metamagic & you have a decent Ranged Touch AB.

It’s also the only spell which references a song by Sade. So in my mind, it makes sense that it kicks a$$.

But joking aside, you may have a point. What would you suggest it should be?

Why? Cone of Cold is the same level, deals 7d6 dmg to everyone in the area which could be a ton of folks, if you point it into a horde of gith or something) , and doesn’t have the chance to fail all your Ranged Touch attacks (for 0% vs 50 dmg).

I was about to say the same. A separate attack roll is needed for each ray so it’s not automatic damage.

It is (nearly automatic dmg), if you’re, say, using it on Athasian Giants, but that’s Tactics, and literally the point of the game (well, the non-RP half of it).

Sonic is the least defended type of elemental damage aside from Divine.

Quickened Truestrike followed by Maximized Quietstorm would likely end any single creature in Terrors of Athas.

You could make the same argument about any energy type. Yes, people tend to have fire, followed by cold and electric protections as the default, but if you’re canny and have your sonic resistance up you’ll mitigate an awful lot of the damage. Just as you will/won’t depending on whether you’ve got any other energy resistance.

As a DM, I’m not averse to throwing all kinds of energy damage to my players, just to keep them on their toes. In return, between the six of them, they more or less guarantee that some of their spells/effects are going to hit my mobs for full effect.

TL:DR, I don’t think this argues for or against whether Quietstorm is overpowered.

Polar Ray is underpowered for an 8th lv spell.

Is Disintegrate underpowered as well?

Polar Ray was split off of Otiluke’s freezing sphere (was a function of it in 2e), plus cold resistance is a thing, vs disintegrate being raw damage with save for reduced damage. Polar Ray doesn’t fit a lv8 spell for raw power is all.

Gets really silly when you split & maximize it.

True Strike would benefit a single ray. The other rays would still be normal touch attacks.

Spells that get silly when split & maximized, IMO, fall under the category of Tactics.

Not all spells are created equal, nor should they be, and pointing out how a smart person could min/max them into awesome/awful-ness is not (necessarily) a sign that the spell is over/underpowered, but rather that you know how to play the game well.

That’d also be the equivalent of a 10th lvl spell, and had dang-well better do a lot of damage.

Yes, this spell is totally unbalanced. We’re talking about 56d6 sonic damage at 9th level, and up to 96d6 damage at 19th level. Sonic damage (the best energy damage) and with no save!

I’d drastically reduce the ray’s damage and even the number: for instance, each ray deals 2d6 damage, 5 rays at level 9 and up to 10 rays. So the damage range for single target is 10d6 at level 9, up to 20d6 at level 15. Imho quite more consistent with other similar spells.

I seem to recall a maximum damage cap on arcane and divine spells in the DMG?