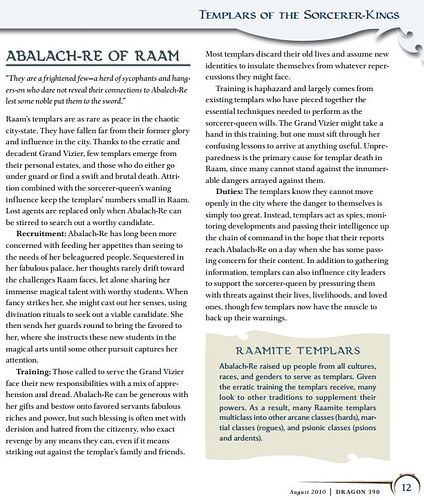 According to this 4E article from Dragon Magazine, Raamin templars assume new identities to protect themselves and their families from retribution. Is it possible that Raamin templars wear masks when conducting their duties? If so, what kind of masks are suitable for the Athasian heat?

Citizen: “Mr Templar, if you are going to fine me 10 ceramic pieces, I insist on seeing your face”. 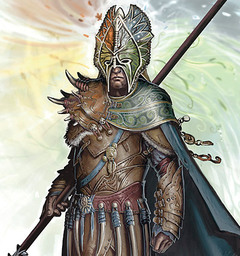 Templar: “Are you sure? Some things are not meant to be seen”.

Citizen: “I am. Unmask yourself or know yourself to be a coward”.

Citizen: “Take the ten ceramic pieces with my gratitude. Forget I said anything”. 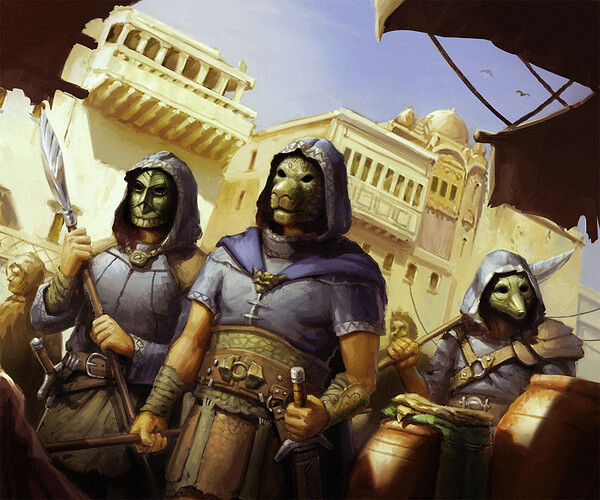 Brazen Beasts from A Song of Ice and Fire (Game of Thrones). The Brazen Beasts have exactly the same issues as the Raamin templars. Risk of being assassinated and their families suffering retribution.

Those look crazy hot. But it’d certainly do the job.

That’s what Psionic Endure Elements is for.

Build it into the mask, or get a tattoo, maybe get a wired tattoo with recharge and auto trigger once a day and forget about it.

That way you can wear what you want.

Build an impressive voice changer into the mask, too. Maybe glowing lights in the eyes. Control Light and Control Sound are easy psionic powers to use for this.

Speaking from an evolutionary point of view, almost all surviving Athasians should have Psionic Endure Elements as a Psi-like ability by now. I’m just saying. And probably Sustenance too, or at least the Photosynthesis power in the case of city dwellers. After all, the SKs need people to be dependent on them for something, so water needs works in the case of the Photosynthesis power.

Makes no sense, ecologically or evolutionarily speaking, that they would be. Switching to a psionic fuel source for both body and mind is a logical possible result of a world wide disaster. At least for those dwelling out in the wastes for generations.

Those coddled by SKs in cities might be a different story, never having had to adapt…

They’d be outlawed because they break the low-level trope of limited resources (water).

No. Both are in DS. Sustenance is far more expensive, however. Look here - I even created a thread about sustenance items last year.

From Faces of the Forgotten North - Blanket of Sustenance: This finely-woven blanket can be worn as a cloak by a humanoid creature, but is more commonly used as a saddle blanket for a steed. Once per day, it provides the benefits of the sustenance power, allowing the creature to go without food and water for the day. Faint psychometabolism; ML 3rd, Craft Universal Item, sustenance; Price 12,000 Cp. It stands to reason that in Dark Sun a sustenance item would cost more than a ring of sustenan…

I was thinking about this the other day and how to present such a situation to the PCs. Here is a vignette.

“How long has it been now?”, one onlooker asked another.

The psion had been sitting there for 40 days already. The psion wanted to prove that through psionic control, one could go without food, water or shelter indefinitely and was planning to do so for 100 days.

4 days later the fasting psion was found dead, a crossed legged corpse in mediation position. There were disputes among the city folk about how it happened. Some said that there were limitations to even psionic powers. Others said that the psion was old any would have passed on anyway. Some thought it was murder, by poison perhaps. Almost all of the city folk agreed that it is best not to push your luck and not eat and drink at all.