What you did do is a fantastic jumpoff point, nonetheless, I particularly like the concept of the Metamages and their possible ties to gith

Back in 2020 in the height of covid lockdown I had made a number of tentative maps based on the Sundered Regions, while using Garolnemay_Montego’s composite as additional inspiration (as they were trying to combine the “Anattan Wastes” with "Sundered Region), these are outdated to even my own headcanon of the region but I’m still using them for inspiration. 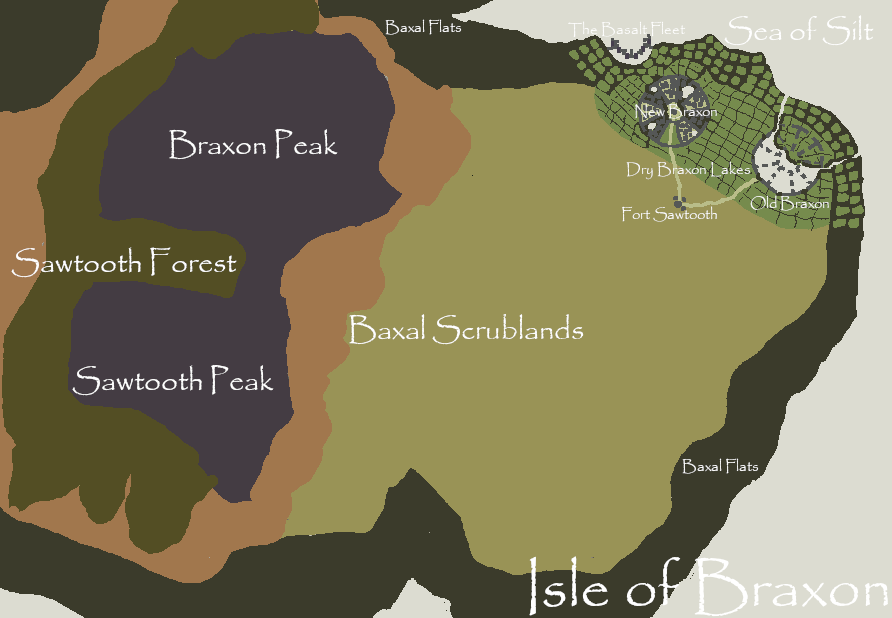 braxoncity892×618 45.6 KB
Braxon and its islands would be lightly forested and connected to the same reef/island system as the Baxal Shoal (from Pirsm Pentad). The city was an ancient colony of the island-nation of Ebe (Ur-Draxa, per 4E) and resettled by Draxans as an eastern outpost. The Lord Mariner flees here after the fall of Ur Draxa with undead and turns the settlement into their new base. Much smaller than Sysane’s take, maybe a few thousand people. 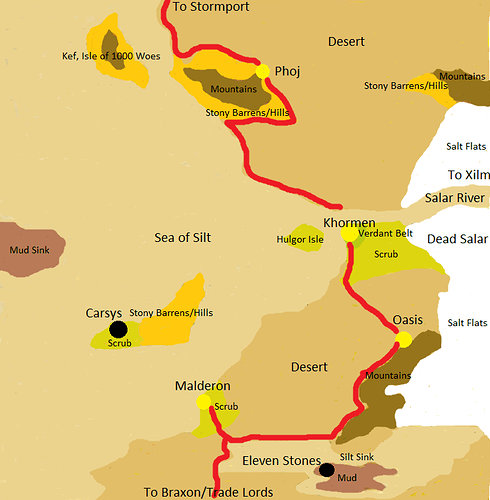 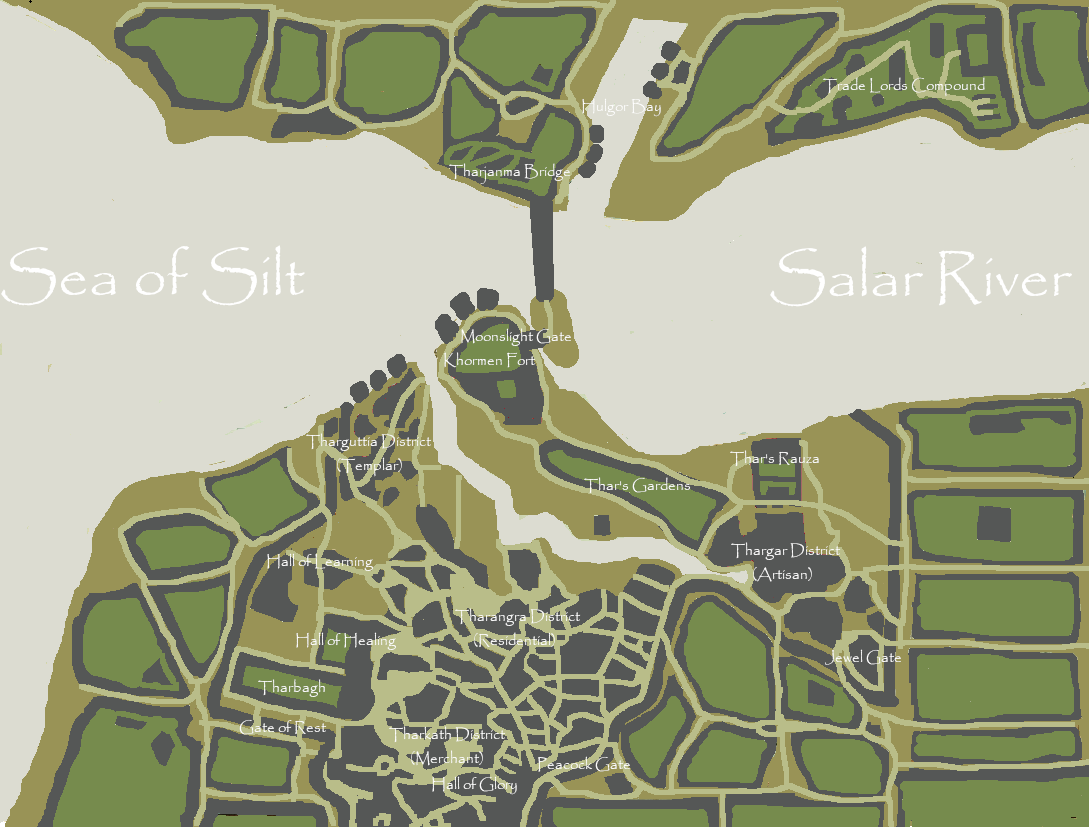 (Ignore Carsys, at the time of making I didn’t know it was in the Trembling Plains)

Khormen (map based on Agra, India) was a Green Age city founded on the Equatorial Continent, Anattan, by either the people of Ebe, or possibly the ancestors of the Draj. While destroyed during the Green Age, it was reoccupied by Draxan as an eastern outpost, partially restored, and surviving scattered communities on the mainland slowly assimilated either forcibly or willingly. Following Ur-Draxa’s fall Amandia and the surviving Dragon Warriors fled east, initially staying on one of the island peaks in the sea of silt before taking Khormen as their own. She’s rallied many surviving draxans to her banner, and unlike the lord mariner is more interested in carving out her own kingdom than waiting for the Dragon to return. Larger than braxon but still relatively small, a few thousand people. 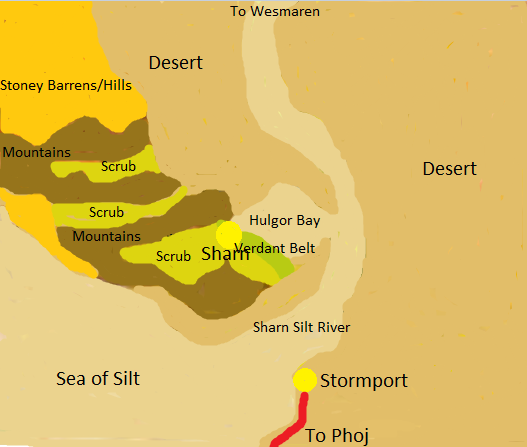 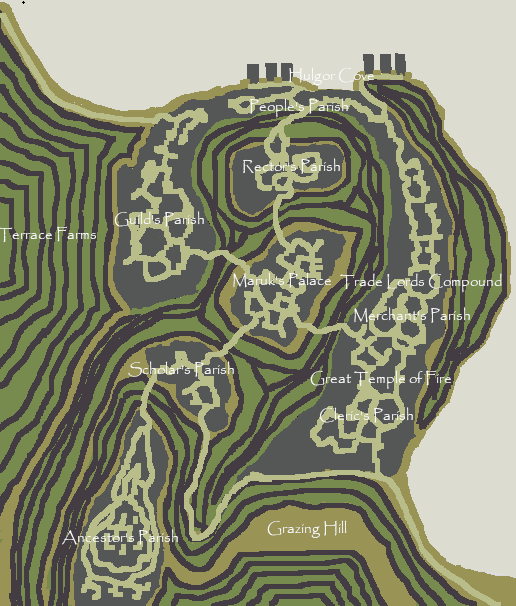 sharncity516×606 42.8 KB
(shamelessly based on Eberron Sharn)
Shorn was another city of the green age proto-draxans or draj who occupied the coast of Anattan, and was utterly destroyed during the cleansing wars, leaving a jumble of shattered towers and rubble. During this ancient battle, a powerful “proto-champion” was betrayed and sealed away under the ruins by their second-in-command, a fire priest named Maruk, who was rendered immortal by a pact with a powerful fire elemental lord. Maruk’s followers were joined by bands of survivors from the Cleansing Wars who found the ruins, which were still relatively fertile due geographic isolation, and the settlement emerged as the only known settlement in the region for centuries, until Borys came. It was too small to extract a levy, so Borys took it as a Draxan outpost (Maruk was in little position to complain) and allowed Maruk to serve as a priest of the “Holy Dragon.” Post fall of Ur-Draxa, the small city has seen a flood of Draxan Refugees, and Maruk is now free to forge their own destiny. The largest of the three settlements, but still only a population in the few thousands. 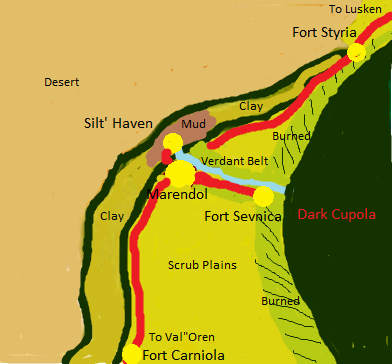 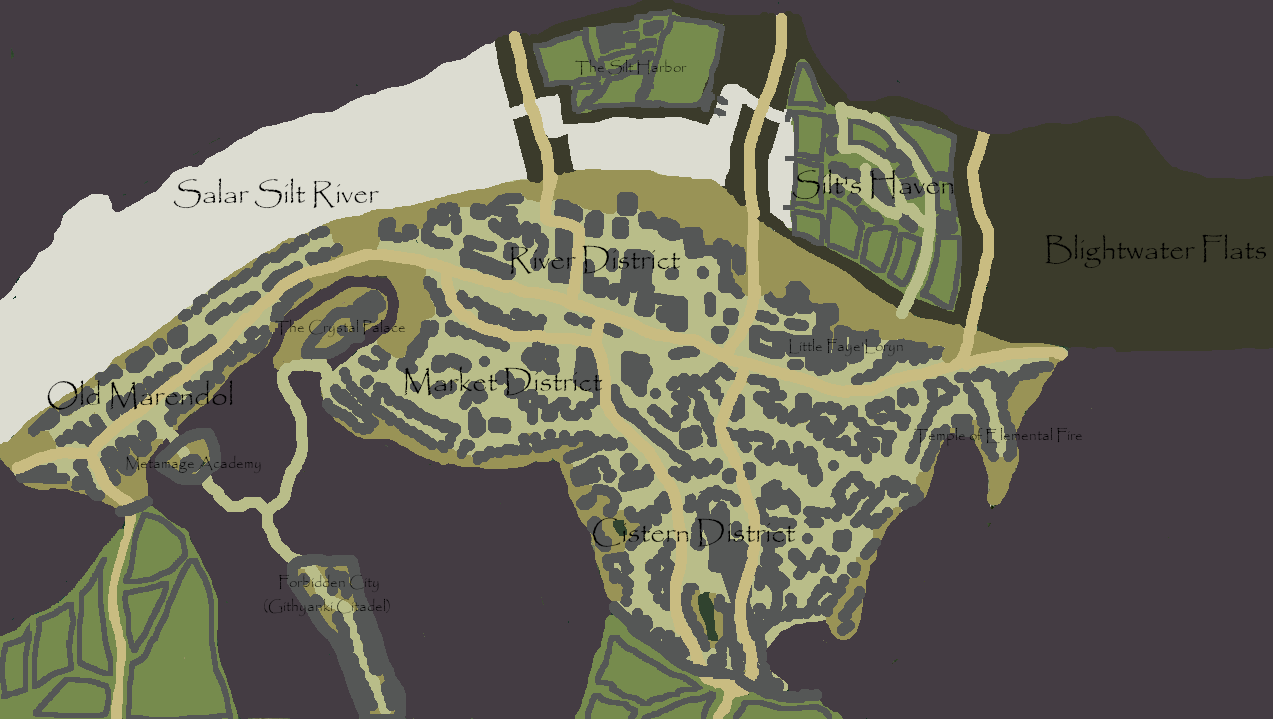 marendolcity1273×719 73.1 KB
(Based on Sevnica, Slovenia, the capital of the province real-world Marendol is located in)

Marendol was another Green Age Ebe/Draj settlement that, while devastated, remained relatively fertile as the broad river it was located on shriveled into a mud-flat. It was resettled by various human survivor groups as well as some Elves of the hidden kingdom of Faye’Loryn, and rapidly came into conflict with the Illithids of the Dark Cupola, who were relatives of the Illthiids of Oshul, of the Hiramin Highlands in the far southwest. Over the centuries the remote town has been locked in perpetual war, turning much of its own lands around the Cupola into a scorched no-mans-land, surviving mostly thanks to the powerful “Meta-Mages” a band of evil psion/defilers who rule as a totalitarian Magocracy. As the town was too small to extract a levy from, Borys took it as a draxan outpost, but the mind flayers were too petty a threat to bother with (and in truth, they probably amused and fascinated the dragon of Tyr), with the Metamages ruling in his name. Post Prism Pentad Marendol has lost the limited Draxan support it recieved and is now on its own against resurgent Illithids from the Cupola. However, it has recieved aid from a mysterious new benefactor- Githyanki whom survived the events of Black Spine and were stranded on Athas, and are eager to enact vengeance on Illithids while securing their own power base.

Great stuff! Had Sharn and its monarch totally devoid being beholden to Borys and the Obsidian Citadel being the only survivor of Ur-Draxa, but love what you filled in for the SR.

I figured Maruk might have fallen under at least the influence of the Dragon (we know he pretty much had run of the Planet) but perhaps their fire pact and isolation enabled them to hide the city, and least for a while. I’m planning to incorporate the Sundra Peninsula as the other side of the continent, by just making the “Dragon” in that area Borys. In my mad efforts to reconcile as much as possible with Brax and Brian’s stuff, the volcanic area from Brian’s map, the Cauldron, is the former homeland of the ancient Kurnans, a green age kingdom known as Kel Tas, which was destroyed by either a random meteorite or volcanic eruption. Due to the isolation and distance from Ur-Draxa Borys reserved it as his private experiment ground, with the “Basalt Tower” being his base in the area. The Republic of Suna is not some hidden enclave- its a dual-sided experiment by Borys to preserve a little slice of the green age and, should the Sorcerer-Monarchs fail to meet the levy, he has a backup reserve. Suna will either be a sellout Avangion who has decided working Borys is for the “greater good” or just an elaborate ruse.

going by the map I used as a base (the combined Sundered Regions/Anattan Wastes map posted in the Worlds Maps of Athas thread) they’re actually rivers of silt which is a cool concept, presumably (magical?) silt flowing like water. There’s one in the dead lands as well, made of “black silt” (pulverized obsidian).

Why? Why just go with the Arabic term? Why not Arroyo (Spanish), Donga (Afrikaans, derived from Zulu)?
Come to think of it, none of the terms we’re talking about are particularly accurate as they all refer to dry river beds that seasonally flood with water. Arguably that’s not the case on Athas except in certain areas (the Ringing Mountains for example) - there’s no seasonal flood.

The term “river” has been used to describe moving bodies non-water substances in plenty of fantasy literature. Lava, blood, fire, sand, all come to mind.

The average Athasian wouldn’t even remember a time when rivers of water existed, never mind what a dried up one would be called.

The Wadi in my campaign flooded in Spring once. It made for a cool tense scenario while the players were using it as a highway. Especially since the walls of the wadi are canyon like, only a few exits and entrances.