Here are two pages from this RPGA module. This is the most I could find. 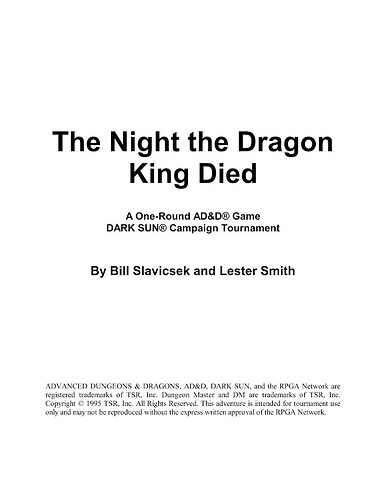 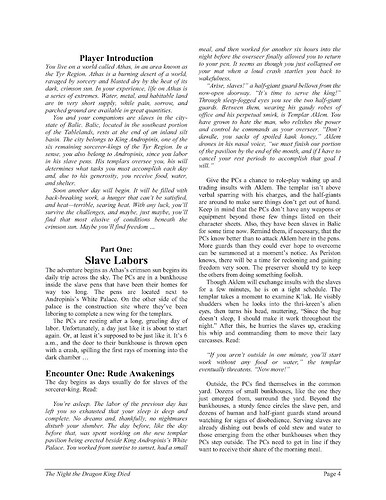 Colour me intrigued as to which Dragon King dies and how. From the intro this adventure has to take place after Kalak’s assassination (reference to 6 SMs) but before the events of Cerulean Storm. It’s co-written by Bill Slavicsek so I’m assuming he’s not going to do a 180 on Troy Denning’s work.

My guess is that he doesn’t literally die or it’s a fake out of some sort. Since it’s set in Balic and immediately starts talking about Andropinus, it’s probably him.

This adventure takes place in the space of
approximately 24 hours. The player characters start out
as slaves under the jurisdiction of Templar Aklem. Part
One covers the morning hours, beginning around 6
a.m. and lasting to about noon. During this part of the
adventure, the PCs experience life as a templar’s
slaves. As the day proceeds, they discover that the
Veiled Alliance plans to help a great many slaves find
freedom in the absence of the sorcerer-king. Part Two,
which covers a period of time from noon to 8 p.m.,
deals with the reactions of the city-state to the news
that something terrible has happened to Andropinis. If
the PCs can survive the riots in the streets, they learn
that the escape plan has been foiled, but another one
has been drafted in the excitement. Unfortunately, if
the PCs don’t hurry, no one will escape from Balic
before the city gates are sealed. Part Three, which
occurs during the darkest hours of the night, chronicles
the Great Slave Escape of the Year of Desert’s Fury.
Does it turn out to be a day of celebration or a day of
mourning for the dead? That depends on the actions of
the PCs and how well they succeed in this adventure …

Year of Desert’s Fury, aka FY11. On the one hand I suspected the adventure would be set against the events of The Cerulean Storm, when Andropinis gets his ass imprisoned in the Black. On the other, I have to admit I always saw the events of TCS as happening early or mid-year FY10. Oh well!

You’re right. It should be FY10, Revised Dark Sun timeline is set in FY 11, only 4 months after the events of the Cerulean Storm as indicated on pg 44. The actual disappearances occur in FY10 in sometime in-between the months of Thaumast and Flagstaad.

Glad I’ve not had things wrong in my head for 25 years!

I have access to the the text of the whole adventure.