Tyr: The Shackled City. The River of Time diverges

This is a timeline from an Athas where an event diverging from the normal flow of history has serious consequences for Tyr.

Free Year 2. King Hamanu orders an attack on Tyr, but his armies are repelled by the Crimson Legion led by Rikus.

Free Year 4. King Tithian begins the search for an artifact that can turn him into a Sorcerer King.

Free Year 9. The River of Time branches off. At the cusp of finding the artifact that can turn him into a Sorcerer King, Tithian is captured by Agis, Rikus and Sadira, and returned to Tyr to face trial for his crimes. The Council of Advisors puts Tithian to trial, and Tithian is sentenced to death for treason and murder. Tithian is publicly executed. Subsequently, the monarchy is abolished and the the Council of Advisors selects a chancellor to lead. Sadira, due to her magical powers and connection with the council factions led by Agis and Rikus is made chancellor.

Free Year 10. Unbeknownst to the the Council of Advisors, after the war with Urik, King Tithian had an agreement with the Sorcerer Monarchs of the Tyr region brokered by the Dragon to keep Tyr safe from attack in exchange for Tithian assisting the Dragon in finding the artifact that could purportedly turn Tithian into a Sorcerer King. With Tithian dead and the artifact still unfound, the agreement is now null and void.

Free Year 11. In the Tablelands beyond the Tyr region, there is a small city ruled by a Sorcerer King styled Magnate Baeron of Senn. Senn is a dying city, the arable farmlands and grazing lands collapsing every year. Told by the Dragon that he could have Tyr if he could take it by force, Magnate Baeron spent all of Free Year 10 preparing a great migratory army, taking every able bodied person with him on a march to Tyr with the slogan “victory or death”. The city was abandoned to the elderly and every templar left with their leader.

Great battles ensued against Tyrian armies once near Tyr. The penultimate battle was fought outside the city walls and in the city streets. Sadira personally entered the fray against Magnate Baeron. While almost equalling Magnate Baeron in sorcery, Sadira had little defence against his psionic attacks. To save her own life, Sadira teleports away to safety, leaving the citizens of Tyr to their fate.

Despite great resistance, the free people of Tyr were defeated. From former slave, to freeman, to Tyrian nobleman, every Tyrian citizen was made a slave and forced to serve the Sennish invaders. Thereafter, Baeron was styled the Iron Magnate of Tyr. Iron flowed from the mines and the Iron Magnate, although a lesser Sorcerer Monarch in terms of personal power, became the wealthiest. During the reign of Kalak, slaves outnumbered citizens two-to-one, at that time considered an extremely high ratio of slaves. Under the Iron Magnate, slaves outnumber citizens four-to-one, as the entire “free city” had been enslaved by the conquerors.

Tyr is now known as the Shackled City, and the Free Year calendar has been abolished.

Interesting. What happens to Rikus, Agis and Neeva? Where, oh where, do Sacha and Wyan sneak off to? How is Baeron a Sorceror Monarch? What was he Champion of?

Questions, questions. Most peturbatory (to quote one of my favourite 40K characters)!

@redking is i believe leaning into his excitement about this: What's Your History of Athas? - #2 by redking in regards to the “magnate” and the Original Boxed Set’s less restrictive use of the term sorcerer-king/monarch; which i think is super cool.

What happens to Rikus, Agis and Neeva?

Neeva remained in Kled with Caelum because the events of the Cerulean Storm never happened. Rkard, their mul son, continues to learn the ways of becoming a sun cleric.

Agis serves Iron Magnate Baeron as an undead advisor. The occult shackles on Agis prevent him from being anything but loyal to Baeron.

Rikus was personally slain in gladiatorial combat by Baeron himself in front of the entire city, citizen and slave all. Baeron thought it important to instil hopelessness by personally killing the greatest hero of Tyr publicly.

Where, oh where, do Sacha and Wyan sneak off to?

Sacha and Wyan have decamped and their current location is unknown.

How is Baeron a Sorceror Monarch? What was he Champion of?

This divergent history assumes the original boxed set Dark Sun setting. Whether there are champions in this setting is for you to decide. For the purpose of this timeline, its history is opaque. We know however that there are other Sorcerer Monarchs in the Tablelands beyond the Tyr region, including one that the Wanderer identifies as styling himself Magnate.

@redking is i believe leaning into his excitement about this: What’s Your History of Athas? - #2 by redking in regards to the “magnate” and the Original Boxed Set’s less restrictive use of the term sorcerer-king/monarch; which i think is super cool.

This is true. The Magnate is served by templars to whom he grants spells just like the others. However, the city of Senn that he previously ruled over was little but a ramshackle small town, so the conquest of Tyr is quite an increase in status.

We know however that there are other Sorcerer Monarchs in the Tablelands beyond the Tyr region, including one that the Wanderer identifies as styling himself Magnate.

I’m going be a pedantic a$$ for a minute and point out that we know that a king of a given city might refer to themselves as a magnate, not that there definitively is one that calls themselves that. 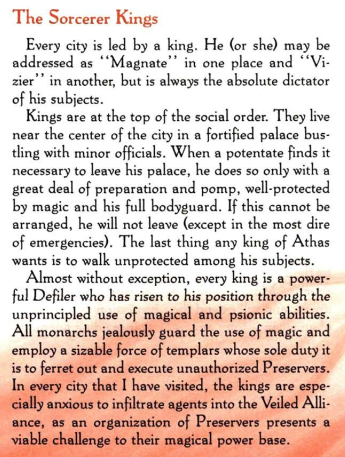 Magnate is simply on the list of possible titles along with king, queen, vizier, etc. Note that if a person misinterprets this outtake, they could also claim that “Oba” is not on the list and is therefore not an allowed SM title.

TLDR: there can be magnates, not there definitely is one.

TLDR: there can be magnates, not there definitely is one.

Or there could be several Magnates out there if it is a popular title in the Tablelands outside of the Tyr region. If you really wanted to be nitpicky, you could claim, based on the Wanderers words in the first sentence, that female monarchs are also referred to as “king”. I think this parsing text of this kind brings diminishing returns. And yes - I know that elsewhere the Wanderer refers to Sorcerer-Queens.

The way the Wanderer writes is that so many things are left an open question.

Almost without exception, every king is a powerful Defiler who has risen to his position through the unprincipled use of magical and psionic abilities.

June Soler wrote a document about the apparent inconsistencies.

What i want, is to avoid or clarify statements about canon that are misleading, for future noobs.

I’ve also personally been noodling on how to play with the idea of additional cities and SMs from those text snippits. Congratulations on beating me to it.

Nice. Definitely a different take on things. It was only a matter of time before Tyr was invaded - SOMEONE had to attach those loose elemental vortices to themselves…

Also on the titles, the only reason I would lean to these being actual formal titles versus just positional titles is because they are capitalized and in quotations. 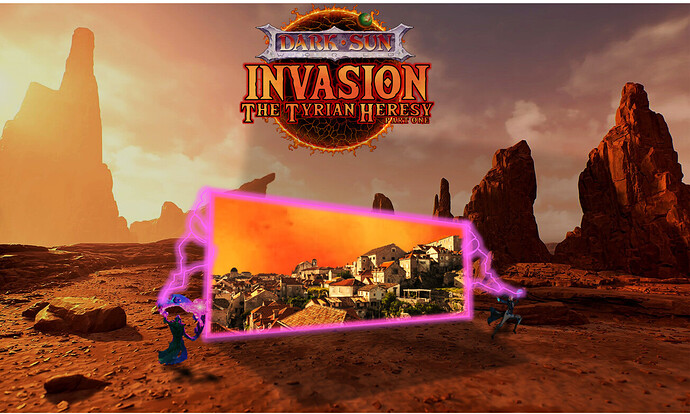 If I were SK, I would prefer the title of, Supreme Commander of the Imperial Forces, Skywalker, my self.

How is Baeron a Sorceror Monarch? What was he Champion of?

I like the idea that you could have Sorcerer Kings elsewhere in the world who weren’t necessarily champions. Although the SKs described in the revised box set are all identified as former champions, there’s no reason that you couldn’t have a monarch elsewhere in the world who’s a 21st level (or 2X level whatever) dragon who has taken over a smaller city, without having once been a champion. Of course, some have implied this was even the case for Kalak.

Although the canon is clear, it might have been a cooler design if the Sorcerer Kings were a mix of champions and dragon kings with other backgrounds… fun idea to play around with. Maybe Kalak and Tec and Andropinis are latecomers. Maybe Tec somehow captured Sielba’s vortex. Maybe there could have been a champion still alive who decided to do something other than run a crappy city too. Fun ideas to play around with, I think.

If we ignore the changes brought about the history of DS in the Prism Pentad. The initial premise was that SKs basically came to power, some died by whatever mean and another would take up the mantle. It happened infrequently, but it was possible.

In the wanderer’s journal of the original boxed set:

Pg. 5 Most of Athas’ sorcerer‐kings are Defilers of the highest power.
Pg. 6 The authors of the kingly histories stumble over their own words in their efforts to flatter their monarchs, but we know from the sheer number of their chronicles that most city‐states are thousands of years old.
Pg. 6 The same sorcerer‐king rules over the city for spans of hundreds of years, sometimes for more than a thousand. There are even cases where the current sovereign is credited with founding the city.

But those excepts could also apply to Yarmuke, which is to say just because most CSs are thousands of years old, and some SMs ruled for hundreds to thousands of years, it doesn’t necessarily mean (or preclude) there are new-ish SMs.

Sielba (of Yarmuke) is an example of a Champion and original SM, but could have only ruled for hundreds of years (there for satisfying the phrasing requirements w/o being one of a new wave SMs).

(if i’m going to pedantically play devil’s advocate, it’s only fair i play against both sides.)

And… since it says " Most of Athas’ sorcerer‐kings are Defilers of the highest power." Newer SMs could be cleric/psions and still count.

But i do like the idea of weak SMs falling and new defiler/psions coming along to take their place.

My variant cerebremancer class, the phrenomancer (a synonym, I know) has fluff that posits this directly. That its not merely arcane casters that the SMs fear, but the combination of arcane magic and psionics that really keeps the SMs awake at night, precisely because it is this combination that produces more SMs.