Which portions of the r7 are actually Open Content?

I am reading the Designation of Open Content section of the r7 core rulebook, and trying to comprehend and confirm exactly what is and isn’t.

The statement indicated that all text “in this color” is Open Content under the OGL. The text in question is black, like almost all the text in the book save headers, references, and links.

Can anyone confirm that black color text was the intention, or was there future color changes planned? Is almost all the book OGL Open Content? @flip @raddu ?

I believe it should be a blue color. But looks like maybe was lost in the latest version. Perhaps it was in a previous version of the rule book. I don’t think it was intended to be all black in that rule book.

Here is the statement in the Athasian Eporium book with the coloring being implemented in the document in the lower pic. I think ToA and the other docs has a similar coloring. 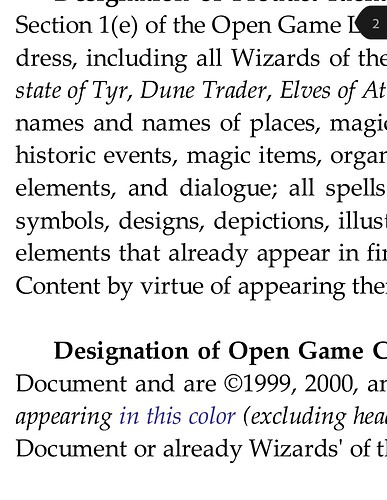 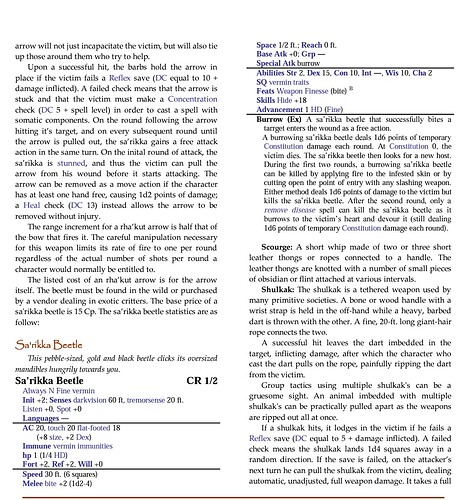 So, the awkward portion of that makes it so that the entire (almost) r7 become open content as it currently reads, technically speaking.

Let me ask a question of narrowed scope: is the entirety of the psychic adept NPC class considered open content? I would like to add it to my current project.

I also have interest towards some of the feats, powers, items, and prestige classes.

All mechanics are open content by definition. Anything that mentions TSR/WotC IP is closed.

Is Athas.org’s content handled differently than WotC’s? Because their mechanics (from Spat books, for instance) aren’t open source as far as i can tell.

That was what I was getting at.

Four whatever reason, the core book states as per the OGL license requirement that text “in this color” is open content. Everything else is not.
The text in question happens to be black for that specific book.
Oversight or not, that technically makes all the text not called out as Product IP into open content. Which might not be revocable, even if in error? Not sure about that…

Even if rules mechanics themselves were legal declared not protectable, that doesn’t mean the text used to describe said mechanics isn’t protected, because it is.

In any case, I just wanted to know what I could use as is, and what I would have to re-write from the core book. Specifically the NPC class, but if more is available, I’m willing to look at it.

@flip @raddu any clarifications to offer?

Yeah, the text color might be illustrative and not binding or whatever, or the reverse. Best to get the experts/author’s take.

Psychic Adept is also from an Athas.org web article https://www.athas.org/news/1, which might have different rights or whatever…

I tried scouring the internet to see if I could find a previous version of the rule book and see if it had the coloring in it. There is a DS3_r6 out there somewhere, but I couldn’t find a copy. (I searched the DS Facebook files, archive.org, and athas.org)

The OGL stuff is not even mentioned in the original DS for 3.0e D&D rule book.

Well, technically Athas is not required to use the OGL license at all, since Athas was, and is theoretically still covered under the Official Fan Site License, which states co-ownership and allowed Athas the use of WotC IP in a way that the OGL and other current licenses do not.

Of course, since WotC seemingly refuses to confirm or deny the OFSL status, that is a tenuous theoretical.

If some of the Athas rules content is in fact OGL, then I want to know, since rules are my big interest and all.

If some of the Athas rules content is in fact OGL, then I want to know, since rules are my big interest and all.

No one is going to stop you from using the base classes and prestige classes published by athas dot org. That said, if the content mentions WotC IP, then you would have to redact that or change that.

Worst case, you can just take the mechanics and change the verbiage.

I’m fairly certain the Psychic Adept is only going to have either new content or things lifed from the SRD. It’d be wacky for it to use cool new stuff from other books, as its whole point is to be a low-powered/boring npc generalist psion.

Looks like the officially OGL content from most of the Athas books are basically useless and unusable.

Pretty much the only blue text are column headings (but not the contents of said columns or rows), skill names, feat names, and a few key words in the text.

Pretty much all the table information and class feature information are NOT OGL, unless it already appears in the SRD as outlined in the disclaimer statement.

So, in effect, Athas has released virtually no new OGL content whatsoever.

I feel sad about this.

If you wanted to include it in your thing, i can see why you’d be disappointed, but…

Why would ANYONE other than WotC (or Paizo, etc) release OGL content?

Athas.org stuff is free in the web, if anyone wants to use it they can, people just can’t reprint it in their own works/books.

Why would ANYONE other than WotC (or Paizo, etc) release OGL content?

For the same reasons why people release Open Source software?

Also, some people like to contribute to the greater community.

I feel like you’re either misunderstanding or being facetious, but i can’t imagine why, so whichever, I’m probably wrong.

Everything adds to the greater community.

The only possible utility (that i can imagine) for OGL-ing content such as that on Athas.org, would be so that other people (you, me - if i wanted to, etc) would be legally protected should they decide to include things like Athas.org’s Royal Defiler prestige class.

Producing a 3.5e adventure (or something) using such a prestige class would only be an issue if you tried to sell it and only if the original author was litigious (a quality more easily applied to WotC than a fan site).

Anything else just seems like a personal quirk or appreciation of the OGL.

Or, I’m COMPLETELY wrong, in which case, would someone please educate me?

Honestly I’d say none. It looks like the OGL was added during the R7 conversion from 3rd edition to 3.5. We didn’t need to have the OGL included and I was not involved at the time.

That being said, mechanics can’t be copyrighted, so any class, spell, race, can be striped of IP and used as you like.

Thank you for weighing in!

That being said, mechanics can’t be copyrighted, so any class, spell, race, can be striped of IP and used as you like.

This. If you want it, take it. Just don’t mention intellectual property like Hamanu or other specifics.