Why does Hamanu Have a Lion form?

Ive wondered why Hamanu has a lion form but no other sorcerer monarch has a anthropomorphic option outside of the dragon form.

Lore wise I think it would be so much more interesting if some of the others say Selbia/Ablach Re - had a snake form. Tek had a Jaguar or eagle or jaguar eagle hybrid form. LILI a panther or some kind of Ape, etc

Is there precinct for this? Thoughts?

I always imagined it had to do with his “I’m an ultimate warrior” motif, and that he’s copying the lingering feelings/imagery of Taraskir, lion beasthead giant and former ruler of Giustenal. (I wanna say that he or other lion beast-head giants aare referenced in Black Spine, in the ruined temple/slave tribe shelter/“village”?)

" The fearsome statues that protect the temple entrance serve to frighten away all but the most desperate or ruthless raiders."

" 1. The Temple Entrance: Huge stone steps and giant stone doors lead into the half-buried temple. Great stone statues guard each side of the doors. The statues are giant humans with the heads of lions."

Yeah, that. So, the Black Spine Mts./Gustinal area probably had prominent Lion-headed giants in the Green Age (whether just representing Taraskir or his people as well).

So, IMO, Hamanu is just using that lion-headed giant shtick to help portray himself as an amazing warrior.

(For the record, I’m not against hearing other ideas about it though.)

So he has a dragon form in cannon? Bummer it sounds so much cooler the other way.

Is the lion form a illusion? Or is it magical spell simular to polymorph?

MY head cannon- I think it would be a perfect point of rivalry for him to choose that form to irritate Tek as he was the wemic killer. Sense Tek has his Winged Jaguar form (head cannon, because otherwise there are no Jaguars in athas) to pick a more powerful beast by choosing a lion, mocking him in a way only they and the other sorcerer monarchs understand.

Most of the Sorcerer Monarchs have their own metamorphosis phenotype. Tec is vaguely avian. Nibenay looks like the dragon in miniature. Go and read final chapters of the Cerulean Storm.

The drawings of Nibenay contradict the description in the Cerulean Storm, however. In the drawings, Nibenay has the head of an eel.

Anyway, in principle all of them metamorphose in whatever way they want.

He takes his form after the constellation Tyrospur the Lion, which is older than he is. 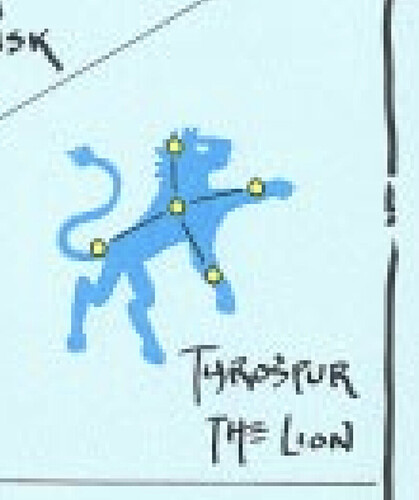 The other thought I had along with the Lion one above was that other SMs had forms patterned after other constellations. Or just the constellations in The zodiac.

There is no canon on this idea. Just offering up alternatives.

Winged Jaguar form (head cannon, because otherwise there are no Jaguars in athas)

Huh? There’s totally jaguars in Athas, or there were and they’re extinct now, as Draj has Jaguar Knights.

I know Draj has Eagle and Jaguar knights, never seen them represented in the source books. Im super unclear as to what real world animals are present on Athas (Rats, Dogs, cats, Birds, etc) or at least the tablelands.

I assumed the drajian jaguar knights and eagle knights got their inspiration from ancient times when their were those kind of creatures.

(Head cannon) -So it would make sense to have Tek use those forms to inspire fanatical devotion in his warriors. As each one tries to emulate thier god.

Lol yeah. I like the idea of it being a choice.
Cant have one turning into a big wheel to scare anyone.

Is there any reference to if Hamanus form is a illusion, polymorph, etc?

I assumed the drajian jaguar knights and eagle knights got their inspiration from ancient times when their were those kind of creatures.

City State of Draj has Jaguar stats, and only says they’re fiund in Warm Forests and that Tec still has Jaguar pens.

4e swapped out jaguars for jasuan, or ambush drake if you want that take on it.

“Great Cats” are present on Athas, per Original Boxed Set.
I have a list and links to official creatures on my blog: Adventures under the Dark Sun: Athasian Monsters
Rovewin made a big list also: Moons of Athas

My two cents on Hamanu having a lion head, is that it’s a polymorph. He’s turning into a dragon. There might be some slight variations, but they’re all becoming dragins.

@Rajaat99 Thanks so much for the amazing links!!

QQ- There are Owlbears, cockatraces, Ilithids, psudodragons, wolverines, etc on athas? Or does this take 4e and fan content into account? Or is this all from the original boxed set?

See that makes more sense to me, but I also love what @The_DMs_Revenge provided about Tek keeping a stable of Jaguars. The last on earth, kept in captivity for vanity.

The lists callout the source that states that the creatures are official.
My list only contains information from 2nd edition and my own fan content is clearly called out.
Officially, there are no owlbears, cockatraces, or Ilithids on Athas.