Okay, so I’ve been wondering about running an adventure featuring Xenomorphs (from the Alien franchise) for a few years (like, before 5e was even a rumor), and with the release of Prometheus and Alien: Covenant and the thread about the Expedition to the Barrier Peaks on Athas by @ProfessorZik-Chil, my interest in doing so has been reignited.

Now, what if Xenomorphs came to Athas via a crashed ship (Engineers?) or have always existed trapped in some underground corner of Athas for untold ages (probably just eggs since they would all die out)?

Considering Athas is already extremely hostile i think they would fit right in. Also we would get some pretty freaky hybrids (B’rohg Xenomorphs anyone?)

So i wanted to ask the community, if you were to do this:
¤ How would you have them arrive/appear?
¤ What would their effect be upon Athas, how quickly would they overrun it, if they even could? Taking all the powers (SM’s, Dragon, etc.) into account.
¤ What adventure ideas/hooks can you think of?
¤ Would you use the Neomorphs as the originals and then some SM tries to mutate and harness them as weapons, therefore creating the original Xenomorphs we know?
¤ What CR would you make them?

Here are some 5e Stats i found for them: 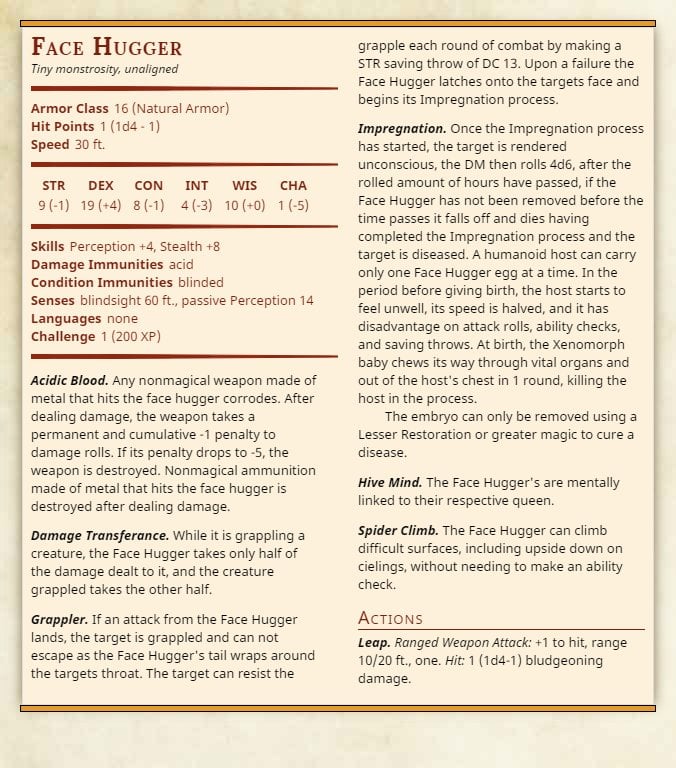 Personaply I think there’s enough lethal fauna and flora on Athas that adding more is just redundant, particularly as I’d always associate xenomorphs with pulse rifles and Conestoga-class Light Assault Carriers. That said, its your campaign so do what makes you happy!

Well, the cool thing is that they don’t use those weapons and can easily adapt to any world’s environment, no matter how inhospitable. Only problem is their acid “blood” (which the Neomorphs don’t possess), which would seriously pose a problem in a world where melee weapons are so common, and not to mention their exoskeleton is tough AF (bullet proof in fact, also something the Neomorph doesn’t have).
Slaads are basically D&D Xenomorphs, but i don’t think they exist on Athas, nor do i much care for them (looks, fluff, varieties, etc.), then there’s Kythons from 3.Xe, they match better (being reptilian).

Wonder if there is a close enough monster on Athas already, that’s stealthy, uses ambush tactics, is intelligent, beastial and alien.
I wanted to make something like in Alien, a horror adventure in a cave system with tight quarters, fissure-like cracks, small side tunnels, in the dark with an almost unbeatable enemy that’s trying to pick them off while they are trying to retrieve a powerful artefact.

Know of a similar monster?

P.S. Still want to know what others think of the first post.

Edit: Also the way they reproduce is absolutely horrifying! No matter how many times i see them burst out of the host it still gives me the willies! The baby Protomorph in Covenant was so adorable though! <3

How would you have them arrive/appear?

After Dregoth Ascending, through the Planar Gate.

What would their effect be upon Athas, how quickly would they overrun it, if they even could? Taking all the powers (SM’s, Dragon, etc.) into account.

Athasian life has a huge advantage over Alien-franchise humanity in psionic capabilities. I’d guess the xenomorphs wouldn’t last a Kings Age, if that

Thanks for your input Broy!

Athasian life has a huge advantage over Alien-franchise humanity in psionic capabilities.

If I’m correct, the Xenomorphs are already kind of psionic as they have a Hive Mind (and the Queen Mothers are said to be able to broadcast messages, dreams, and even control xenomorphs and other creatures across the universe), and i would think they would gain even more psionic abilities from the naturally psionic creatures on Athas. They seem to already possess a bit of psionics themselves and would probably develop even more while on Athas. Whether naturally or from the inhabitants DNA. What do you think? The Queen Mother, also referred to as the Mother Queen1 or Hive Mother2, is a large form of the species Xenomorph XX121 that serves as the supreme controlling force of the species; even Queens are subordinate to them. Queen Mothers have only been...

I agree that they may not last long, but you have to remember that any xenomorph spawn are basically an upgraded version of the host. So you might get a superbly fast elf xenomorph, flying aarakocra xenomorphs, or ginormous four-armed brohg xenomorphs, the possibilities are endless, really.

They seem to gain some memories from their hosts as well that helps them adapt and survive in their environment. As seen in Alien: Resurrection (from Ripley’s DNA, and she also could feel them in her head BTW) and here: though they look more or less the same as normal xenomorphs, ADVENT xenomorphs are very different from their human-spawned counterparts. as the name suggests, they emerged from ADVENT soldiers instead of true humans, and as a result, they inherit the...

Ridley Scott also mentioned that they can regenerate (like a troll almost) in the Director’s Commentary of Alien: Covenant. I quote: “Oh he gets crushed, broken apart and falls to the ground, his DNA will allow him to regrow.”

I’m just trying to take everything into consideration.

While xenomorphs might have some slight psi-capabilities, they’re not getting the jump on Athasians as often as they would Alien-franchise humans. I just don’t see them being able to cope. Sure, against realistic humans they do just fine, but they don’t stand a chance under the crimson sun. Druids and clerics would hate them(unnatural), and so would the Sorcerer-kings(for eating into their slaves/subjects). Good for an adventure or two, but ultimately doomed to extinction.

Still in agreement, however don’t you think they would gain psionic abilities from Athasian hosts?
The ADVENT Xenomorphs suggest they do (see Xenopriest and Xenocardinals).
Meaning you could get psionic and maybe even sorcerous aliens (as a sorcerers gain their power from their bloodline/ancestry and the xenomorphs are made up of the host’s DNA).

Eh, maybe the psi, but not magic(as magic isn’t inheritable in DS).

Correct.
I was thinking for other settings (FR to be specific).

By the way, is there a site like this devoted to another setting?

EDIT: Going to search around.

Personally I am not a fan of the idea specifically. I think general aliens are too powerful for the setting and would pose serious problems (unless that is the campaign you want). They are, as pointed out extremely tough, already psionic (which will increase with Athasian DNA) and reproduce very quickly. A normal person in leather armor and with a bone weapon isn’t going to scratch an alien.

But also they don’t bring a lot to the setting, tough, vicious psionic creatures are a dime a dozen in the desert. The spawned from other races thing is kind of part and parcel of Dark Sun’s story already.

If I were going to bring them in it would be in one of two capacities, either as lost weapons of ancient life shapes or as a living weapon in Dregoth’s Arsenal.

I like the former, as Life Shaped bioweapons. It’s a nifty idea, don’t know why i didn’t think of it, as their biotech already is pretty weird and alien. Now i just need to figure out why the Rhulisti would create such a thing.

“…I fear the worst is yet to come. Change is in the air, and change has never come gently to Athas.”
– Oronis, Sorcerer King of Kurn

This quote has always given me ideas for an apocalypse in the already apocalytic world of post-apocalyptic Athas.

¤ Xenomorphs
¤ The aberrant infestation in the Forgotten North from Athas.org.
¤ Or the inhabitants of the Deadlands trying expanding the Deadlands over the rest of the world.
Etc, etc.

I just like brainstorming these things with others for ideas.

I believe the change he was originally speaking of was PP and after.

I believe the change he was originally speaking of was PP and after.

Yes, i know. But many reject it (PP), since it changes the setting so drastically. I’m fine with it, but i like to play around with alternate histories and/or “what ifs”. The quote could be applied to anything really, if you wanted.

That’s an interesting idea, if that were true, then what were the apex predators, did they survive and evolve? Silt Horrors maybe, or some other species still umdiscovered in the silt? Maybe they died out, who knows?
And of course the xenomorphs got out of control (as always).

By the way which form of reproduction do you prefer for the xenomorphs?
The original idea of Eggmorphing by Ridley Scott (in which dead bodies are turned into eggs, which is admitably more horrifying and alien), or of the Hive Queen by James Cameron (which kind of makes them less scary by making them more relatable to an ant colony)? Maybe a combination of both?

The queen generally lays eggs, as far as I know giving birth to full xenomorphs is very rare. I think eggs are much more frightening I’d I have to choose between eggs and live birth.

And what the threat was, I don’t think I would define it. Leave it to the player’s imaginations, after all if those are the cure how bad was the disease? Besides I like to leave blank spots and let my players do the work.

That was only because that queen was a half-human hybrid, so was the Newborn, and it was weird AF.

between eggs and live birth.

Of course many say that Eggmorphing is a backup method of reproducing when there is no Queen (assuming the caste system). And that the eggs created by Eggmorphing contain Queen facehuggers.
Ridley doesn’t like the cast system that James created in Aliens, but it’s now considered canon. Could be either or both, depends on what you want to consider canon.

And what the threat was, I don’t think I would define it.

That’s what i was thinking.

Leave it to the player’s imaginations

That’s the only problem, the nosy players will want to find out what it was/is, and i like to have at least a vague idea of what (insert anything) is, just in case they come up with sme ingenius way of finding out (as players inevitably do).

You know what? Scrap that! I’ve always been the type to improvise on the fly!

Besides I like to leave blank spots and let my players do the work.

Exactly! That’s how the best adventures unfold, organically from the player’s actions. In fact that’s the only campaign one of my players actually remembers, where it was player motivated, with events happening in the background that could be ignored or followed, a living breathing world in essence.