I have been working on a couple of different projects. Between the calendar I worked on and a map of the night sky, I recently combined them to make a planisphere which will show you which constellations appear in the night sky at a given day and hour. Check it out in more detail here: Moons of Athas 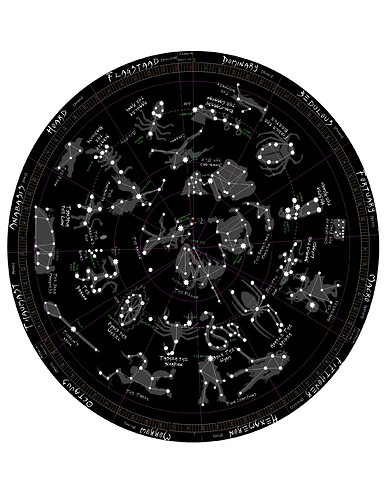 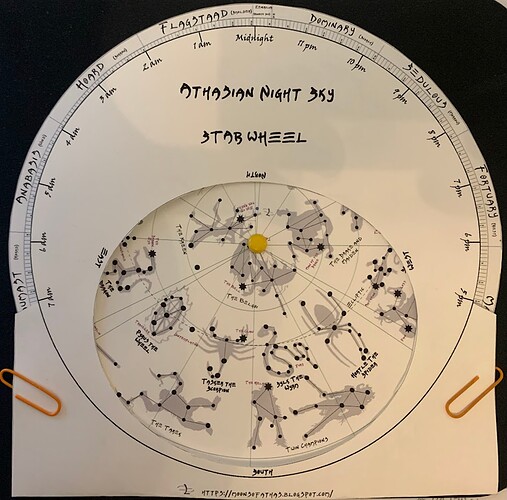 I love this to pieces man.

For which latitude is the planisphere window meant? Given the second visual I’m almost inclined to say it would seem to be below the equator in the southern hemisphere. Is that correct?

It’s 30-40 degrees. It also assumes a axial tilt of about 23.5 degrees like earth. So there’s that even though i am not convinced athas is that tilted, but it has some tilt. And There’s no specification on where on the globe of athas events occur. But this would be some thing most people would relate to.

Everything I have produced is with the assumption that reference points are above (north of) the equator. There is nothing in canon I can find that indicates one way or another. And I have looked for stuff, believe me. But for convention I kept it the same as what I thought most players were accustomed to. Call it “northern hemisphere privilege”. However, I don’t feel that there is enough evidence to indicate that the Tyr region is at the equator. If anything it is above or below a decent distance.

Maybe your next step could be an Athasian weather program, through which GMs would deploy realistic weather tailored for day, night, covered or not, etc, indicating variations in weather.
Sure, Athas has little weather, but reading on various distinct weather patterns in arid regions of the world would help - Spain, Irak, the Sahara, Death Valley, salt flats, etc

This topic here is absolutely relevant.

I recently stumbled upon this system for determining weather. and realized this could be something useful for my dark sun games so I decided to make a version more suited to the tablelands. I reckon it could be useful for some of you folks as well. [athas weather map]

I’ve started using this and it’s really nice. I do feel regional and/or seasonal variance could be interesting to come up with different such charts.

Don’t think I haven’t already toyed with that a bit already.